When You Solve Rather Than Support Your Partner 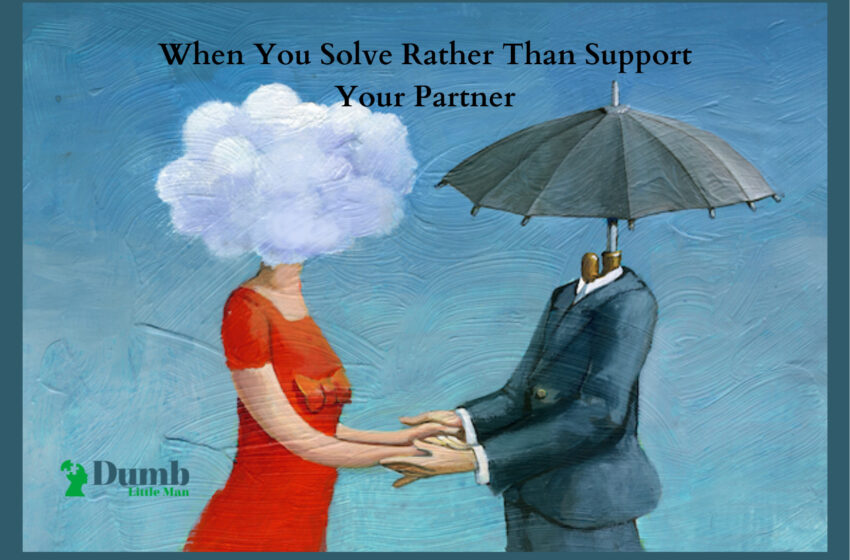 Your wife or girlfriend comes to you in frustration and goes on about a problem she’s having at work. You listen dutifully and then promptly explain to her how to fix the problem. As you’re feeling pretty good about yourself for being able to give her the solution to her issue, you notice she looks a bit like a coiled snake ready to strike with daggers coming from her eyes. What went wrong? Was it bad advice?
No, it’s not that you gave her a bad solution, it’s that you gave her a solution at all.

Huh? Isn’t that why she came to you in the first place? No, my friend, it’s probably not, and you just made a very common “guy” mistake. Rather than supporting her by empathizing you tried to fix it for her.

When Problem Solving Causes More Problems For Him

A man’s desire to “fix” problems is instinctual. From an evolutionary perspective, men are wired to protect and care for the people they love. Men have a long history of being the “strong” ones in the relationship, ensuring that danger stays at bay and no harm comes to their families.
Fast forward several thousand years and men still gravitate toward fixing the problems brought to them by those they love, or by anyone really. The ability to solve problems has become ingrained in masculine stereotypes and is now considered one of the hallmarks of masculinity. Kind of a “woman has problem, man fix problem” aspect to things.

Unfortunately, this along with several other traditional “male” attributes often do more damage to situations than help. Not only can these stereotypes cause problems in relationships, but they can also cause big problems for the men themselves.

It’s not unusual for men to feel pressured to conform to what they perceive as their expected role in a relationship or society in general. When this pressure is contrary to their internal comfort level and abilities, or not well-received as in the case of solving problems out of turn, it can be psychologically damaging to a man and lead to larger problems with self-confidence, anxiety at doing things correctly, or even male depression. And in men, who are less prone to discussing their feelings and resolving them, the expression of these problems can be through anger and self-isolation.

Why Solving Her Problem Makes It Worse For You Both

From your wife’s or girlfriends’ perspective, your attempt to solve her problems can feel insulting and out of turn. The truth is that most women who vent about a problem to the men in their lives aren’t looking for a fix. They simply want an empathetic ear and let off some steam. They may also need to hear their issue stated out loud in order to gain perspective on what they’re facing.

In fact, women often already have a plan in mind as they tell you about their problems. When you jump in with your solution it generally goes one of three ways.

① I already thought of that

If you are explaining a solution (mansplaining) that she’s already thought of she can feel like you don’t think she’s smart enough to come up with a fix on her own. “Don’t you think I’m capable of thinking of that on my own?” or “How could I ever survive without you (eye roll),” are likely to be the kind of responses you’ll receive.

② You think you know better

Your solution is different than what she had in mind and the perception is that you think you know better than her. This may leave her feeling as though you’re being condescending and lack faith in her problem-solving skills. You may be met with immediate push-back and irritation as she explains to you why that won’t work (even if it might).

I wouldn’t hold your breath on this one, although it’s what you were probably expecting when you jumped to her rescue. It is occasionally possible, however, depending upon the circumstance and your approach, that she will thank you for your idea and help.
Given the overwhelming likelihood that you will encounter reactions 1 or 2 rather than 3, it’s probably a good idea to consider new ways to respond when the woman in your life unloads a problem on you.

What To Do Instead

If she doesn’t want you to fix it, what are you supposed to do when you hear that she’s got a problem? Honestly, nothing really – just listen.
The woman in your life is your partner and should be treated as such. That means that she doesn’t want you to respond as though she’s running to you for help every time there’s a problem. She does, however, want to be able to tell you about her problems and know that she’s heard.

So, when she tells you about something she’s facing, consider taking one of the following approaches.

Generally, I mean to empathize with her over what she’s experiencing. If, however, you have a different perspective and feel she may have misread her situation, offering your viewpoint (not a fix) can be beneficial. There’s always a possibility she’ll feel that you don’t get it, but we all need to be checked sometimes.

As your partner, she wants to know you’re interested in what she’s talking about. This goes for all conversations, not just problems.

Ask her if she needs anything

You can express your willingness to help by simply asking her if she needs anything. She may say no, but she may also say yes. Either way, the ball is in her court, and you’ve shown that you care about her enough to want to be part of the solution without taking over.

I would suggest that when your partner expresses a problem you treat her like one of your buddies, but unfortunately, men are often as bad about this with each other as they are with the women they love. Things can quickly devolve into my solution is bigger than, I mean better than, your solution.

The biggest thing to remember guys is to wait to be asked before you begin solving the problems of others, especially your partner. That practice will serve you well and allow you to be appreciated for your effort rather than dismissed for it.