I Didn’t Do It! Why Do I Get Blamed For Everything? 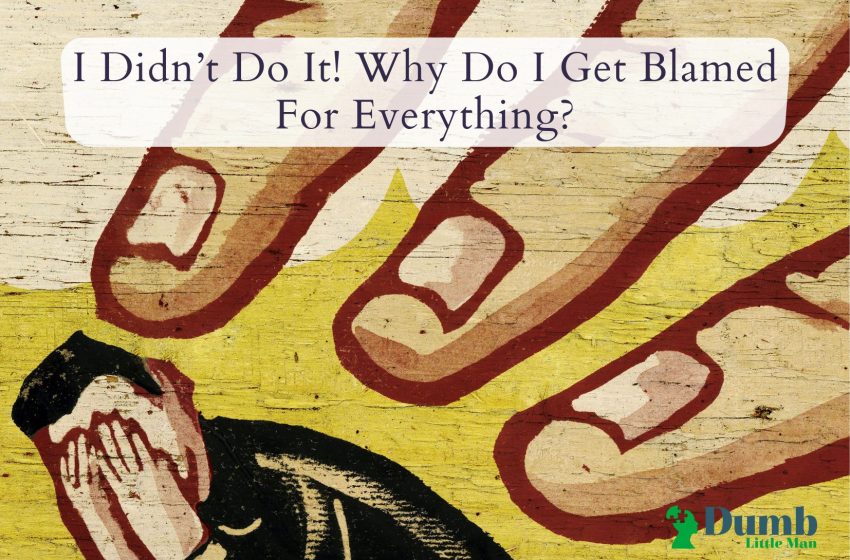 One of the biggest red flags that equality and respect in your relationship are off balance is when one partner persistently plays the blame game. And not only is it frustrating and detrimental to your relationship, but it also can cause long term damage to you.

Can You Recognize Unwarranted Blame?

It seems like identifying misplaced blame should be obvious.

These are all clear signs of blame language.

There are other forms of blame, however, that aren’t so easy to see. These less obvious signs of blame are particularly dangerous because they can go on unopposed for a long time.

What do I mean? Consider the following:

Why Partners Get Unfairly Blamed

Clearly you aren’t responsible for bad service at a restaurant or a faulty appliance, and parenting can and should be done by both parents. So, why would one partner consistently blame the other for things out of their control?

There’s generally not one reason that stands alone, but rather a few that come together to create a toxic mindset.

When the conditions are wrong (vs. right), a person might lash out, looking for ways to externalize, deflect, or soothe themselves by placing blame on others. Sadly, the easiest place to park unfair blame is on the person you’re closest to.

Some conditions that might contribute to this happening are,

Guilt is an insidious emotion. The longer it sits without being dealt with, the larger the effect it will have on a person’s behavior. One of the most common ways unresolved guilt manifests is through externalizing, i.e. blaming everyone else for anything and everything.

Lack of or low self-esteem

“I’ll blame them and put them on the defensive before they can see that it was probably my fault.” Sound irrational? It is. But people with low self-esteem often deflect with blame hoping to hide their own insecurities.

This can go hand-in-hand with low self-esteem. Equal and respectful partners shouldn’t feel jealous of one another, but it can happen – especially in parenting. If one partner is jealous of the other’s relationship with the kids, lashing out via misplaced blame isn’t uncommon.

Everyone’s childhood is different, and if your spouse grew up in a household where they saw one parent continually blame the other, or they were often unfairly blamed themselves, they may not realize that they’re now doing the same thing.

Do you make most of the money? Are you diligent about working out? Do you love your job? There’s nothing wrong with any of that. But if your spouse is insecure, unhappy, or jealous, they may also become resentful and want to find ways to bring you down. Of course, another reason for resentment is persistent and unresolved marital problems. So, before you blame them for blaming you, consider whether there might be other contributing factors causing resentment within your marriage.

Unfortunately, many people don’t recognize narcissism in their partner until they’re years into their relationship. Narcissists are quite adept at making others feel at fault for anything that puts the narcissist in a bad light.

This isn’t an exhaustive list of the reasons for blame behavior, but these are some of the most common. And, as mentioned, you’ll often see more than one at time in the partner doing the blaming.

The Dangers Of Blame

“Okay, but we’re mostly fine. I can handle it.”

If that’s what you’re thinking, think again. There are long-lasting consequences of being unfairly and repeatedly blamed.

Let’s start with the two most obvious:

Being consistently made to feel at fault for things can create a constant state of worry and even fear in a person.

You may find yourself walking on eggshells, second guessing every decision, and losing self-confidence. When an environment like this is created in a relationship it’s unhealthy, and there is clearly a deficit in respect and equality.

Unchecked blame can also eventually rise to the level of emotional abuse. If the blamed partner becomes,

the constant blaming may have escalated to abusive behavior.

Can You Fix It?

The short answer is, yes. But it can take time.

Changing the behavior of someone who chronically blames others can be tough. It will require the blaming spouse to recognize a need and have a desire for change in their own behavior. Most people are resistant to seeing their own faults, especially when they’ve become comfortable with finding fault in others.

So, consider the following approach:

You should also have an idea as to your own limits and level of tolerance. Going round-and-round isn’t progress, it’s just spinning your wheels.

Changing behavior isn’t always something that can be done alone, or as a couple. Sometimes you may need the help of an experienced counselor, especially if the reasons for the behavior are deep-rooted and complicated.