Written and Published by David on December 19, 2013 - Reviewed by Dumb Little Man 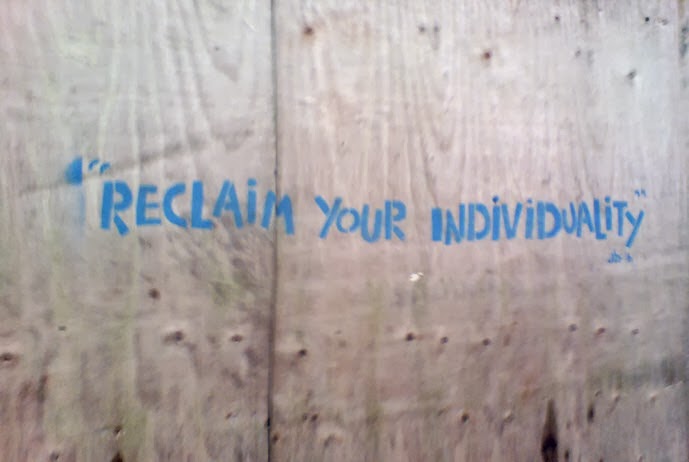 We’ve all been told to “just be yourself” at some point in life.

“Hive Mind” Compels Us To Think Or Act Like Someone Else

Imagine you’re in a business meeting, and Jane stands up and proposes regular brainstorming meetings. You don’t think it’s a good idea. But before you open your mouth, you see everyone around the room smiling and nodding their heads. They’re all enthusiastic about the idea. You keep your mouth shut.

This is called “hive mind.” The term comes from the way that honeybees, though individuals, act as a cohesive whole, as if they have a single consciousness. In humans, it happens when a group of people want to get along to the point that they actively suppress their true thoughts and feelings. The unanimous agreement may start from one person saying, “That’s a great idea!” Then the people merge their unique perspectives into a single group perspective. In business, this might mean fewer quality ideas. In life, it could mean losing your identity.

Stereotypes Exist Because Of “Hive Mind”

It’s human to want to belong and find your place in the world. That makes it tempting to “tweak” yourself to be like a stereotype to assure you can fit in with others. If you don’t know yourself, it can be tempting to take on a personality template. But it’s a pretty incredible fact of life that every person is unique, and we need to embrace that! If you don’t embrace it and explore your identity, you might end up living someone else’s life, and feel empty inside as a result.

The way you present yourself to the world is a declaration of your identity. If you dress and act like a stereotype, your unique traits will be hidden behind this more obvious label that everyone is familiar with. I’m not saying it’s wrong to dress in any certain way – that would be contradictory to this article – I’m saying it’s best to avoid “hive mind” in life.

When you purposefully dress and act as a well-known stereotype, there is a greater chance and temptation for you to embrace that cookie-cutter persona instead of being yourself.

When people do this, it’s like they’re actors, playing a role that someone else created. They learn the dialect. They mimic the clothes and body language. And their real traits are held hostage behind this image.

Being Unique Can Be Uncomfortable At First, But It’s Better Long Term

Imagine if in the meeting with Jane, you said, “Since our division’s work is more technical than creative, I think we might be better off without these extra sessions.”

This comment would shatter the hive mind, and open up the full spectrum of ideas once again. After a brief silence, one lady says, “Actually, yeah, I usually have all of Friday to focus on my TPS reports, and it would set me back to have a meeting that isn’t completely necessary. Mr. Lumbergh would need me to go ahead and come in on Sunday as well. Thanks.”

While there was pressure to conform to the vibe of the room, you knew it wasn’t for you, so you let everyone know in a courteous way. That opened up the floor so that others could state their true feelings too. And in our fictional example, it was decided that the meeting would be optional, which was better for everyone.

Diversity is why it’s so important to be yourself. It is one of the most interesting parts of life, and it expands our knowledge and ideas. And the more stereotypical, conforming clones we have in the world, the fewer unique and interesting people we’ll have to learn from. People label themselves because it’s easier at first, but later they feel trapped to live up to this image that isn’t really them.

Security Is Knowing Who You Are

If you live according to a persona or stereotype, some amount of confidence comes with it, because you know how you’re supposed to act in most circumstances. Gangstas are tough and foul-mouthed, hippies are easy-going and peaceful, etc. So when you have any self-doubt, you can simply act your part. But this is a cheap substitute for reacting dynamically from your true identity.

The safety in being yourself comes from knowing yourself better than anyone else. And the more you act like yourself, the more you’ll get to know yourself. And for personal development, knowing your true self equips you to change yourself. The reason most adults are more confident than children is because they’ve had more time to get to know themselves, so they’re less sensitive to the world’s opinion. But as a kid, you’re new and impressionable, and it’s for this reason that so many kids will resort to being an image of someone else rather than themselves. It feels safer.

If you had a precious gem that nobody else in the world had, some people would claim to know about it. Some people might talk bad about it. But only you know the truth about that gem, because that gem is you!

The best tip for being yourself is simple. Don’t try to be anyone else.

If you’re interested in the full strategy that has me going to the gym at least three times a week (four months in a row!), writing about 2,000 words a day, and reading every day, look for my book “Mini Habits” to release before Christmas! The Mini Habits system is a fantastic alternative to New Year’s Resolutions too (which have a lousy 8% success rate according to University of Scranton research). I’ve always had weak willpower, but with Mini Habits, that hasn’t mattered.

Also, if behavioral science and neuroscience  interest you, but you’re not one to read boring studies,consider signing up at Deep Existence. I read the studies for you and share the science in entertaining and applicable ways. Signing up is also the best way to keep informed about Mini Habits. This concept is going to change more than just my life, so I’m excited to share it. Lastly, these book updates will come with my personal life improvement emails every Tuesday and three bonus gifts. Visit the subscribe page to see the details!

Get daily tips and tricks from Dumblittleman!
Your subscription could not be saved. Please try again.
<svg viewBox="0 0 512 512"