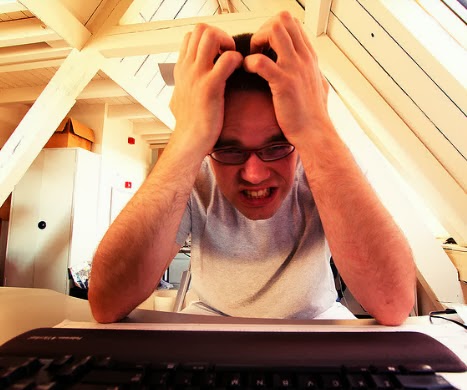 Many people assume inspiration and motivation to mean the same thing.

They’re so different, however, that I only believe in seeking one of them, and it’s inspiration.

Why Getting Motivated Is An Unreliable And Frustrating Strategy

Getting motivated is such a backwards practice. Many don’t realize this, but it often involves using your willpower to force or convince yourself to feel like doing something; it’s an ironic brute force objective that states, “I’m going to want to do this whether I want to or not.” Getting motivated is a struggle to change your inner feelings.

In theory, this seems like a decent plan. Both feelings and thoughts are internal and related, and a change in perspective can certainly change how you feel…sometimes. But when you’re really tired or in a bad mood, you probably won’t turn the ship around with motivation (and you probably won’t try to!).

Why Internal Inspiration Is Very Effective

Most inspiration comes from the realization and belief that you can do something. This belief inspires and motivates you to take action because when you believe you can do something and it offers a reward, you have all of the motivation you need. When you consider the reasons that people aren’t inspired (and motivated), at the core it’s usually a lack of belief. If you really want a six pack and sincerely believe you can get it, then you’re going to get it. But if you have doubts for any reason, including doubting your desire to get it, you’ll lack internal inspiration (and probably try “getting motivated”).

Inspiration is effective, but that doesn’t mean to go watch inspirational Youtube videos or read success stories. Those offer temporary inspiration that more closely mirrors the effects of motivation. You’ll see that this person did it, and think, “well maybe I can do it too!” Perhaps you can do it, but your belief in yourself cannot rest on “that dude did it, so…” This is a secondary form of inspiration that rarely lasts because the source is outside you! What we all need is to be inspired internally – the only type of inspiration that renews itself.

Colonel Sanders of KFC fame was inspired internally. You know how I know that? Because he was rejected 1,008 times before he got a yes from a restaurant owner for his chicken recipe. He didn’t listen to a motivational tape 1,000 times to keep going. He believed in himself and his chicken recipe! I’m sure at times he felt discouraged, but there’s a key part to this story that isn’t often mentioned. Colonel Sanders had already experienced success at this point in his life.

It’s not fair to name drop very successful people like Colonel Sanders. I mean, of course they’re inspired – they’ve already had success! But don’t you see? That’s it. They’ve had success. That’s why they no longer need external inspiration. Success in an endeavor is the only form of proof, and until you succeed on some level, self-doubt will hound you. And when people have self-doubt, they often seek motivation. But motivation isn’t the answer.

Earlier, I said, “inspiration comes from the realization and belief that you can do something.”

But how can believe in yourself when you’ve tried to do it and failed before (or have never tried)? It’s easy for Kobe Bryant to find inspiration to stay in shape, because he’s been doing it for years and it’s associated with a lot of success in his basketball career. It’s harder for average Joe to stay in shape because he’s never done it, isn’t sure if he has what it takes to get it done, and hasn’t experienced the benefits firsthand yet.

Despite his doubts, average Joe wants to get in shape. So he tries what everyone tells him to do – he “gets motivated.” He reads articles and focuses on the health benefits of exercise, but his success is as inconsistent as his desire to exercise. He’s not inspired by his progress and it’s a constant struggle to motivate himself. Sound familiar? I think we’ve all been there.

Since motivation works for average Joe sometimes, he assumes it’s the right strategy and he just needs to tweak it somehow to “get more motivated.” But he doesn’t realize that motivation isn’t a 100% on type of thing. Sometimes you’re too tired, sometimes you just feel off, and then you’re more motivated than anything to not do important things. It’s not the right strategy, and he has fallen into the motivation trap.

The motivation trap is so powerful because it empowers you to do mediocre things that seem “good enough” and offer false hope of more. Don’t fret. There’s another way!

How To Use Willpower To Generate Internal Inspiration

In the beginning of this article, I said people use willpower to get motivated. What if, instead of that, they simply cut out the middle man (motivation) and used willpower to force action directly? Good things, that’s what!

It might take you some practice to get over the poisonous mindset of “I have to be motivated to do things,” but once you do, you’ll love it. The only thing that feels better than hard workout is a hard workout after not being motivated at all to do it. Once you see yourself taking action no matter how you feel, and once you start seeing amazing results in your life, your internal inspiration is going to light up like a blazing inferno.

Nothing is more exciting than demonstrating dominance over your feelings. It means you can get yourself to do anything. And when you think about people, it’s not our physical limitations that hold us back as much as our mental limitations (which are often self-imposed, such as believing you have to be motivated to do anything).

And by the way, you already have enough motivation and inspiration inside of you. Right now, there are goals and dreams that you really want. But doubts and fears can easily smother that internal flame. When that happens, people begin to look for fire and passion outside of themselves, but that fire doesn’t last. The only way your inspiration is going to last is if it comes from inside of you (i.e. internal inspiration).

But how do you do it? That’s a big question. For starters, I’ll tell you the basic steps I took to activate my internal inspiration. I’m not against motivational tactics because I’m trying to be different, I’m against them because they wasted 10 years of my life, stringing me along with mediocre results and false hope. Here’s what I did to change successfully and make 2013 the fittest, best read, and most productive year of my life.

First, I denounced motivation. I decided I didn’t need to wait for motivation to take action. I don’t care about it anymore, and now I’m free to do what I want in life. Ironically, I’ve never been more motivated!

Result: I can take action regardless of how I feel, and motivation almost always arrives shortly after I begin.

Second, I learned how to use and conserve willpower by always starting very small. Since willpower is limited, you can’t just force yourself to change your life overnight. When you try to change overnight, nothing happens. When you do a little at a time, you see big results.

Third, I created daily Mini Habits. Mini Habits are repetitions of very small requirements. With repetition, actions get easier because the “automated” part of brain recognizes it and starts prompting you to do it subconsciously. Mini Habits use up very little willpower and spark your internal inspiration – seeing yourself take action is the #1 most powerful source of internal inspiration. It’s easy to believe in yourself when you’re actually doing it!

Result: It’s easy for me to exercise, and I read and write daily too (regardless of how I feel). All of these are habits or near-habits now.

Why You Can Do It Too

Your ambition is your own worst enemy. You might even think your ambition is too low and that’s why you don’t do anything, but it’s the opposite. If you’re down in the doldrums and not doing anything, it’s likely because your willpower is completely outmatched by the size of your desires. You’re so far away from the target that you don’t bother to move. It’s like a baby trying to curl a 50 lb. dumbbell.

Did you do it? Ok, good. Now here’s what you just demonstrated.

There’s no reward or motivation for you to touch your nose, but you did it anyway because you can. But if you forced yourself to touch your nose 3,000 times in a row, it would truly be a difficult challenge. Your brain would resist it. When it comes to your willpower, it’s basic math – do you have enough willpower for the size of your desired action? When your desired action is super small, like touching your nose once or doing one push-up, the answer is going to be yes. When your desires outmatch your willpower, you lose.

Does this concept sound right to you? If so, and if you’re interested in the full strategy that has me going to the gym at least three times a week (four months in a row!), writing about 2,000 words a day, and reading every day, look for my book “Mini Habits” this December. The Mini Habits system is a fantastic alternative to New Year’s Resolutions too (which have a lousy 8% success rate according to University of Scranton research). I’ve always had weak willpower, but with Mini Habits, that hasn’t mattered.

Also, if behavioral science and neuroscience  interest you, but you’re not one to read boring studies, you’d love signing up and staying focused at Deep Existence. I’m passionate enough about this to read the studies for you and share the science in entertaining and applicable ways. Signing up is also the best way to keep informed about Mini Habits. This concept is going to change more than just my life, so I’m excited to share it. Lastly, these book updates will come with my personal life improvement emails every Tuesday and three bonus gifts. Visit the subscribe page to see the details!