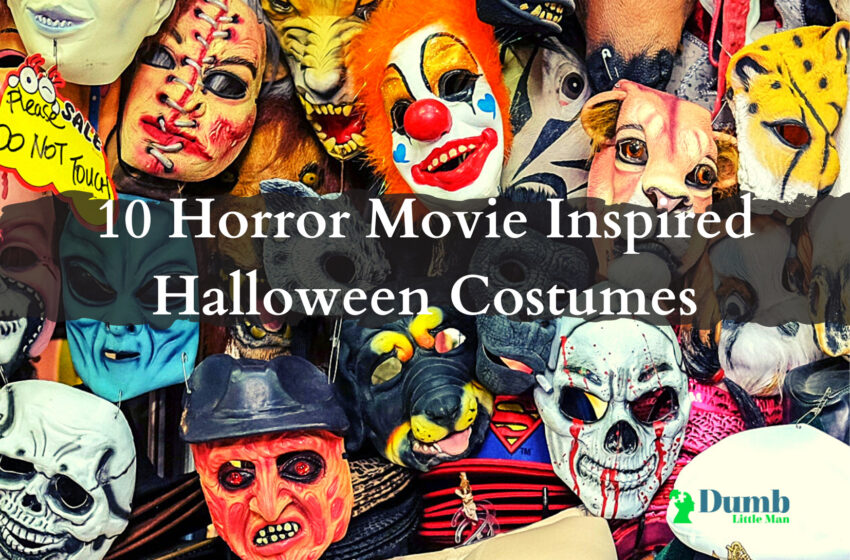 Halloween season has come! And it’s that season of the year where people can do both: Dress to express and impress. Let’s get this spooky season-ready armed and ready!

The best way to rock an amazing Halloween costume is to be synced with the character you are trying to imitate. Don’t trick yourself out of this and treat yourself with your craziest costumes.

Here are some of the famous and iconic characters in the Horror genre to rock with this Halloween party.

The iconic purple trademark worn by Jack Nicholson and Heath Ledger in the previous Batman movies is gone. This new Joker look recently played by Joaquin Phoenix is changing the face of the Joker.

Skills on display include but are not limited to dying your hair green, doing your own Joker-inspired make-up, blasts of hysterical laughter timed for awkward audience discomfort, funky-chicken style dance moves, the occasional blank dead stare, and assorted poker face expressions indicating a depressive state of mind. Joker is an attempt to elevate nerdy revenge to the plane of myth, which is scary on a lot of different levels

Rocking a Joker look and dressing as one of Batman’s nemeses and one of the world’s most infamous supervillains is definitely a catch this Halloween party.

Ground-breaking works are often dangerous, flouting aesthetic and challenging moral norms, forcing you to see the spiritual realm and demonic from angles you’d rather not, through the eyes of this demoniac-inspired costume shocking only in the degree of its malevolence.

Get The Nun Costume here!

This grim, ghastly face is one of the scariest in all of horror and Halloween parties, and the complete corruption of an image that is supposed to be one of the kindest and most religious in the world.

There seems to be something that is inherently frightening about wearing a nun’s habit. It’s an extremely stark and almost creepy image already, as the black and white cloak that only reveals a nun’s face is obviously intentionally very concealing and restrictive. Unless you’re face to face with a vindictive demoniac dressing as a nun, you really never know what you’re going to see, but clearly, no one would ever expect to see something like Valak.

Get The Nun Costume here!

Actually, you don’t just admire Ghostface. The parade of suspense and brutality is so repetitive and finally so tedious that you root for this character’s alter ego emergence. Obviously, there are a lot of masked characters in horror movies that are absolutely iconic, however, it is something that can typically go really well or really badly.

One of the most difficult things to navigate and conjure in a Halloween costume is about a masked villain is choosing the actual mask that the villain is going to wear. This Halloween costume wears its influences like an innocent prank and another mask psycho transformed as a masked murderer liberating our eyes from those underlit interiors of life.

It’s no big surprise, choosing and really rocking this character’s total look, with a really great mask in referential to the horror movie Scream, this white face during Halloween parties pays homage to one of the classic horror villains while putting a brand-new spin on the masked murderer.

In the movie, Friday the 13th, Jason Voorhes, or just Jason, is the main classic hockey-masked murderer character of the horror movie series. He is the main antagonist of the movie series. Coming back to like again and again only to kill whoever he comes in contact with. Jason always goes on a killing spree, slashing everyone he comes across with using his machete. Getting this look this Halloween is an iconic forever horrifying pop culture figure.

Jason’s look is freaky and iconic. Tip to ace this Halloween look, you need to wear a cream hockey goalie mask and wear tattered dark clothing, gloves, and boots, and lastly carrying a machete of some kind. This vicious and seemingly immortal slasher is one of the beloved and favorite characters of horror enthusiasts. Rocking a Jason Voorhes look is one of the preferred costume options during Halloween.

⑤ Pennywise The Clown- IT

In Stephen King’s thrilling and chilling reboot of the horror blockbuster “it”, Pennywise the dancing clown resides in the sewers and has the uncanny ability though to shape-shift into whatever a person is most afraid of.

Rocking this look during the Halloween party elevates you as the character in the film to a level that most horror films just can’t achieve.

Most people are afraid of clowns. Then you know already what a terrific costume Pennywise will be to scare the pants off your friends at any Halloween party!

Dressing like Pennywise you must be able to have hair that has bright reddish-orange tufts that stick out all over your heard, almost like it’s on fire. A wig is a great way to get to this iconic Halloween look without damaging or dying your own hair, Hairspray can be used to master the look of the character’s hair.

Lastly, one of the creepiest things about clowns is that makeup! You will never know who or what they are under all that paint. To be able to pull off Pennywise’s frightening makeup, cover your own face in white Halloween paint or Goth foundation, and use red lipstick to paint your nose and lips bright cherry red. Don’t forget, this killer clown has lines of red makeup stretching from the corners of his eyes back down his mouth, and black eyeliner around its eyes.

While masked creatures deserve their own moment in the dark as some of the scariest and most innovative horror costumes of all time. It’s not easy to deny that the horror movie villains that are created around are both more sophisticated to achieve.

Bring the nightmare to your street this Halloween with a costume of one of the most iconic horror movie characters of the 80’s, Freddy Kreuger. This character’s burnt face, hat, striped sweater, and iconic bladed glove are as terrifying as they are unforgettable. This is one of the favorite costumes to wear when you want to really spook convention-goers or Halloween party guests. Let’s get this nightmare started.

In any foolproof case, anyone was still unaware of this legendary character, Michael Myers, and his iconic mask, that ghastly white face is actually a William Shatner mask that has been painted over. Aside from the ultra-low-budget Halloween movie, it received a lot of accolades for making one of the scariest horror costumes in movie history next to nothing.

What Michael Myers normally wears as his outfit, along with his mark, usually after getting rid of his hospital robes. It’s really amazing to realize that a retrofitted Captain kirk mask, a pair of coveralls, and a basic kitchen knife are all that it took to create one of the most memorable horror characters of all time.

Slenderman is a pure product of electronic media. He appears in places we rarely frequent abandoned, crumbling halls, deep woods, a playground with a rickety steel jungle gym. He is a suburban ghoul with his own history and his own methodology and, of late, he has become the object of controversy due to an attack in Wisconsin during which two girls stabbed another in order to appease Slenderman’s dark needs. It was a horrible story and it underlies how little we understand about the psychology of a generation weaned on the Internet and how images can morph from fiction to fact in the course of half a decade.

A tall figure with no face who guides children with him into the forest, this spooky digital age boogeyman has appeared in feature films, an HBO documentary, and even video games!

To dress like Slender Man, it’s a faceless Fear factor that is almost always depicted without any facial features. All pale, bald head no eyes, mouth, or nose. To get a similar look for your costume, you can use transparent white fabric such as pantyhose material to cover your own face or check out Halloween shops locally and online to find a good mask. The main outfit consists of the black business suit in a classic style, looking like a gentleman from a distance. This works best for tall people who want to rock this Halloween look since authentic Slender Man is portrayed as taller than a normal person with its eerie features of long snake-like black tentacles coming out from his back like arms

John Kramer is a fictional character and the main antagonist of the Saw movie franchise. A recognizable as well as a frightful costume idea for Halloween in true “Jigsaw Killer” fashion. Your costume will definitely pass the torture test.

What to wear? A black suit with a red bow tie. You could probably find a mask, paint it like the one from the movie. Bonus points if you can find a squeaky red tricycle.

Once done, get your acts together and just roll around on your squeaky tricycle, and in the deepest voice you can say “I want to play a game.” This will definitely up your Halloween game!

Samara Morgan is the central antagonist of The Ring, a series of American films. She is the vengeful spirit of a young girl, who had a tragic life. This is definitely one of the easiest costumes for Halloween to pull of for all the ladies out there.

What to wear in order to portray this vengeful ghost? you’ll need a Victorian-Style Nightgown, Long Hair Black Wig, Body Paint, White Gothic Foundation, and what horror costume would be complete without some Fake Blood. Go for the full act and crawl around the floor towards people like you’re going to suck the life out of them.