Change Your Attitude With Timeless Life Lessons From My Dog

Written and Published by David on July 6, 2013 - Reviewed by Dumb Little Man 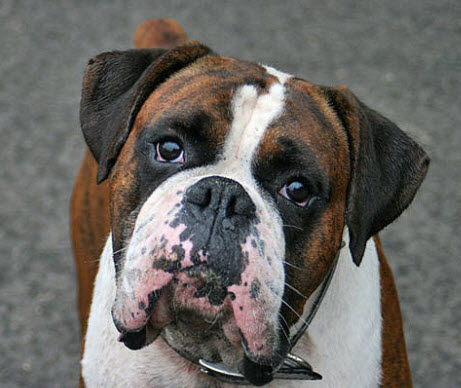 That was my dogs name. He was named after A. Top Gun And B. A chocolate bar. Two things I enjoyed as a child.

We picked him up from a place roughly 5 hours from my home. I lived in Germany at the time, and I was only young.

We drove around towns I had never seen, Germany was different from what I was used to, after all I was used to British culture.

The landscapes, the sun going down and the woods creeping around me.

We finally reached the house. I was shattered. My eyes were being clamped down.

I don’t remember how late it was when we got there but the sun was set and the cold started to make be shiver.

Out walked a friendly German couple.

There he was. Maverick. The Boxer dog. He was even large back then. Out he came, confidence, cocky and loving.

He was born to show off. His Dad shot him down, putting him in his place, showing him that it wasn’t right to show off to new people. (Oh, how animals are so like us hey?)

We originally came with the idea of owning his Dad, but Maverick set such an impression on us that we would of been crazy not to want him.

That Dog changed my childhood. I wasn’t the guy I am today. I was quite small, didn’t have a huge amount of friends and I was shy. (I’m quite the opposite now.)

Growing up with him for over ten years had a huge impact on my life. In fact, he taught me a lot about living.

He may not of said anything; but after all that’s my job right?

He did however, take action.

Let’s get into the lessons that he taught me:

Everyone was scared of my dog.

Maverick had a large muscular frame and he out weighed most dogs that people had. Weighing in around 9-10 stone, it’s safe to say he was big.

However, his size wasn’t the only reason he was unique.

When we see someone bigger than us many feelings and thoughts race through our mind: Fear, intimidation or plain out dislike for that person.

Most would have one of these judgement with him. They would hide away never even stepping foot through my door, never mind even near him.

After time some courage would come over them and they would approach him.

He would treat them like he treated us. With love.

Maverick was a soft dog, his personality didn’t match his size and he really showed me to not judge a book by it’s cover.

I can relate. Some people before they have got to know me have said “From just looking at you I would of thought you was a douche” Their words not mine. Truth is I am, but they don’t know that!

All Joking aside. This taught me a lot and within the mainstream world of weight lifting some people may not know the reasons why we lift and want to become muscular. It’s rarely for the reasons on the cover.

2.Show some love to your fellow man, women or animal of superior intelligence.

It’s a word most men shy away from.

With an animal we have unconditional love.

We take them for walks, we stroke them to make them happy and we feed them some awesome food. (Well they enjoy it, I don’t recommend it.)

The truth is; we show love for them without asking for anything in return. It’s unconditional. It’s always there and they never ask for it.

Now. Think of your friends, your family and even yourself.

Do you give love and care without asking for anything in return?

I’m not telling you to stroke your friends but maybe give more than you receive.

After all you would for your pet.

A pet  may not be “blood” but we treat it like it was.

Show some love. (I feel like an Ad for a charity right now. Sorry)

3.Patience. Learn it through others.

Truth is as a teenager I was angry.

I was stressed, impatient and a little bit of a tool.

I still remember it to this day.

I was asked to take Maverick for a walk. Being a moody boy at the time, I stressed out, moaned and kicked my feet.

The simple task frustrated me. After all I could of been playing on computer games. But nope. I had to take Maverick for a walk.

Looking back on it now. I was foolish.

I took him out. It wasn’t a bad day. The weather was average.

If it was now I would of enjoyed the expereince but I didn’t.

He wandered along, sniffing lampposts, strutting his stuff, I wanted to go home so I pulled him in the direction to go back home. He was an extremly well behavioured dog, but he was having none of it.

He wanted to stay out.

Me on the other hand. I wanted to get home, put on the TV and lay still.

I could feel myself getting frustrated. It was pointless, there was no need.

There I was getting angry at my dog, “Get here now, we’re going home!”

I pulled the lead. He stood there staring at me.

Then it hit me. I was having a go at someone who hadn’t caused any harm to me. It was my patience and ability to manage stress that was low.

I reframed. I stood there looking at Maverick wondering why I was doing what I was doing.

I sighed and carried on walking, but this time it was for him, not me.

That time was a turning point. It was either my realization of my reaction to him or me growing up; I like to think it was both colliding with one another.

Sometimes we rush, and never slow down.

I’ll always thank him for allowing me too. Even now that he’s passed.

A man never forgets his friend: His Dog.

I put together a 5-day course that Dumb Little Man readers can get, just because I love DLM (and you!) so much.

Check out course page on building a bigger life, getting things done and achieving an explosive and heroic body.

Drop your email address, and I’ll send you the course.

I can’t wait for you to check it out.