Understanding Why We Act Out of Character 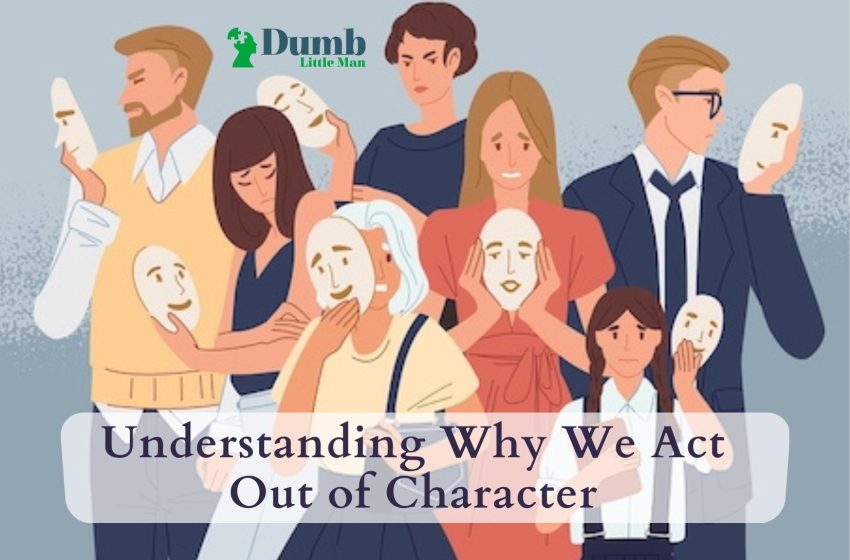 Your character encompasses all of your beings. It goes beyond actions to include your thoughts, beliefs, and behaviors. Most people have a definitive sense of their moral compass. We all judge ourselves and each other by specific standards through religion, culture, and upbringing.

People with strong convictions can project their values on other people. But even people with the most vital principles stray in small or large ways. Researchers often try to explain the phenomenon that makes the most ethical among us hypocrites. And it all comes down to one simple fact; you cannot strictly define one’s character. If your beliefs are packed into a tight, neat box, you will continually be surprised when your actions fall beyond those bounds.

Character is not static.

Living means continually facing situations that put us in conflict with our core values. These defining moments place us at odds between seemingly “right” choices. Imagine choosing between spending quality time with your family or going on a work trip to provide for your family. Either option prioritizes the people you care about in different ways. For defining moments, there is no correct choice.

Defining moments are the small decisions we make often enough that they can gradually change our character. Having to work to provide for your family more often than spending quality time turns you into someone who prioritizes your work life over time. That kind of change doesn’t happen in a day. But each time you choose one thing over the other, it makes that decision easier to make in the future.

It is impossible to downplay the effect of your environment on your personality. People with social awkwardness may struggle at a job that requires constant social interaction that is at odds with their introversion. They may not become immediately comfortable talking to people but can find it much easier with time. Environmental influences can have both positive and negative effects on our character.

Personality psychologists identified the five broad personality traits. These core traits are extraversion, openness, conscientiousness, agreeableness, and neuroticism. Each attribute represents a range of two extremes from high to low. All people fit into any point on the spectrum of each trait.

Enneagrams are different in that they account for the added complexities of our behavior. Although nine personality types explain our behavioral traits, we can still act in ways that defy them. This multifaceted nature is where Enneagram wings come in. Your wing symbolizes another aspect of your personality that complements or contrasts your actual type. So, if you are an Enneagram 3 wing 4 type, you likely primarily demonstrate the tendencies of an Enneagram Three but also have some behaviors consistent with Enneagram four. In other words, it adds different characteristics to your Type that may make you different from someone with the same type but a separate wing. Regardless of your type, your wing behaviors exist because humanity is not unidimensional.

Most people have a level of self-awareness where they can articulate their morals and justify their behavior. This mental picture we have of our personality is often romanticized. We often project an inflated sense of morality when our values aren’t truly being tested.

We are all hypocrites. Hypocrisy is a part of our DNA. We elevate ourselves and our peers as righteous while demeaning outsiders. Personally, there are things that I have been conditioned against doing culturally and religiously. That was until I did these seemingly “bad” things and realized I was no better than people who acted in that way habitually. Maybe we are against some behaviors because we have not been faced with a situation that allows us to rationalize it.

You might act in ways that cause you to question your morals and entire identity from time to time. That is a part of the human experience. It doesn’t make you an awful person. We all have lapses in judgment, and the trick is not to let it define your character moving forward.

We should all allow ourselves some room to be flawed and do the same for others. If we can understand that our characters are not neatly defined, we can accept that in other people too.