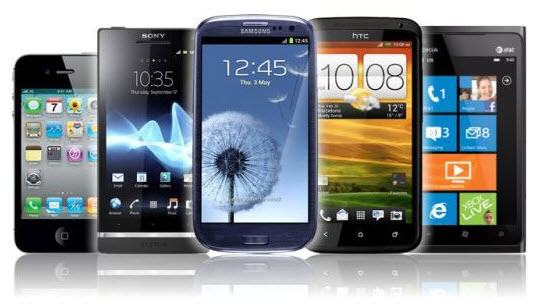 Twenty years ago, hardly any of us had cellphones, because they were big, heavy and expensive. Now they’re tiny, light and can do lots of things beside make calls. The smartphone is the Swiss army knife of modern life, the device that can replace a dozen other devices like your camera, alarm clock, notepad and more.

If you’re tired of your old phone and ready to upgrade, here are ten questions to ask yourself before choosing a new handset—and possibly signing up for a new contract.

What type of phone do you want?


The most likely answer is a smartphone, since the data-friendly devices surpassed simpler cellphones in sales last year. If you think you don’t want a smartphone because they’re more “complicated,” check out those of your friends. You may find they’re easier to use than the older models with those annoying little buttons.

Once you’ve decided to move up to a smartphone, or upgrade the one you already have, it’s time to look at the models currently available. There’s a phone for every budget and lifestyle, so be prepared to shop around.

A good place to start is your local big box electronics store, which is likely to have a variety of brands and models at all prices. Pick up the phones that strike your fancy and see how they feel in your hand. Too thin? Too heavy? Is the screen easy to read?

Another consideration is battery life. If you’ll be using the phone a lot while on the go and don’t have much time to recharge it, then look for a phone that offers better-than-average battery life.

All iOS phones are Apple iPhones, so the choice of models is limited. However, the choice of apps is unlimited—more than you’ll ever need. Apple really does “have an app for that,” which is a big selling point for their iPhones. While new iPhones are among the most expensive smartphones on the market, you can pick up an older model for a more reasonable price, and it will still be compatible with Apple’s OS—at least for the next couple of years.

There are lots more models of Android phones to choose from, but the system is still playing catch-up with Apple’s App Store. Android phones are also generally cheaper than iPhones.

Are you eligible for an upgrade?

If so, you may be able to get a new smartphone for a greatly reduced price, or even free. The hitch is that you have to sign up for another two-year contract. If you’re satisfied with your current carrier, and they’re giving you a reasonable monthly rate, then you probably don’t have a problem with giving them two more years. If you’re not satisfied, then it’s time to shop around.

Is your contract up?

If not, you can expect to pay a penalty for early termination, so you might want to consider holding on to the old phone until you’re “free.”

Now that you are free from your contract comes the important question of pricing.  How much are you willing to spend?  You’ll be surprised at some of the options that are available if you do a little shopping around.

How much do you want to pay per month?

How much do you use the phone and what for? If you have it as your only or primary phone for both work and personal use, you want a reliable phone with unlimited calls, text and data. If your primary phone is at the office or your home landline, then you’ll be using the smartphone less often and can get by with a less expensive plan.

Before upgrading your phone and signing up for another contract, look carefully at your bill. Are you paying for more minutes and data than you use each month? Could you save money with a cheaper plan? Or are you getting charged for overages and need to move up to the next more inclusive plan?

Once you decide whether you need a limited or unlimited plan, it’s time to start comparing carriers for the best deal.

Which carrier offers the best deal?

This question doesn’t have one pat answer, because there is no one-size-fits-all  mobile phone solution for everyone. Last week, my neighbor and I sat down at my computer to find the best deal for him to upgrade his old phone to a new iPhone 5. We went to the sites for AT&T, Sprint, T-Mobile and Verizon and priced the plan he needed.

We discovered that he could save money by switching from AT&T to T-Mobile, but also that I was better off staying with AT&T. The “best deal” is the best deal for YOU, and unfortunately, you’ll have to do a little research and shop for it.

Go to the sites of the top four carriers and do some shopping. Pick the phone and plan you want and put them in your shopping cart. See what you find when you try to check out. Read the fine print!

Can I get a lower price on this phone if I wait?

Possibly. Chains like Best Buy and Radio Shack offer frequent sales where they drop the prices on certain phones for a limited time. If you already know which phone you want to buy, check the weekly sales for these chains and see when they have a lower price on your model.

When a new version of a phone like the Samsung Galaxy comes out, the price goes down on the previous model, so you might want to hold off on buying a phone that’s going to be updated very soon. (Hint: the iPhone 5)

So now you have started narrowing down some of your options as far as model and your budget.  But is there any money out there for your old phone?

Can I get anything for my old phone?

It depends on what model it is and the condition. Apple’s iPhone is the most-wanted used model, but only if it works. If it died after you ran over it with your car, no. If it’s a recent iPhone in good working condition, yes. Best Buy has offered credit towards an iPhone 5 if you trade in the old one, with amounts ranging from $30 for a 3GS to $200 for a 4S. You could also sell it on eBay or Craigslist.

The best part about signing a new contract is getting a new phone for little or nothing. The bad part is that you’re stuck with it for two years. If you’re sick of contracts, you may want to consider getting a pre-paid phone. These tend to cost less per month but your choice of handsets is limited. You also have to pay full price for the handset, which can be $600+ for an iPhone.

Do you take a lot of photos with your phone?

If you do, look for phone with the best camera you can find. If you’ll be videoconferencing, you’ll need front and rear cameras, so make sure the phone you buy has both.

Do I need the latest model smartphone or will last year’s model do?

That depends on your needs and how much you’re willing to spend. The latest model phone from Apple or Samsung will set you back at least a couple of hundred bucks, even with a two-year contract, while last year’s version may be much less, or even free on-contract. If money is no object, or you always must have the latest gadget, go for the new model as soon as it comes out. If you’re on a budget and the older model does everything you want it to, pick last year’s model and save a few bucks.

Whatever phone you pick, you’re likely to be stuck with it for a while, so choose carefully! Be sure to buy the phone you’ll enjoy using.

Things To Consider While Searching For A Rental Apartment