Overcoming the Fear of Success

Written and Published by SJW on January 9, 2011 - Reviewed by Dumb Little Man 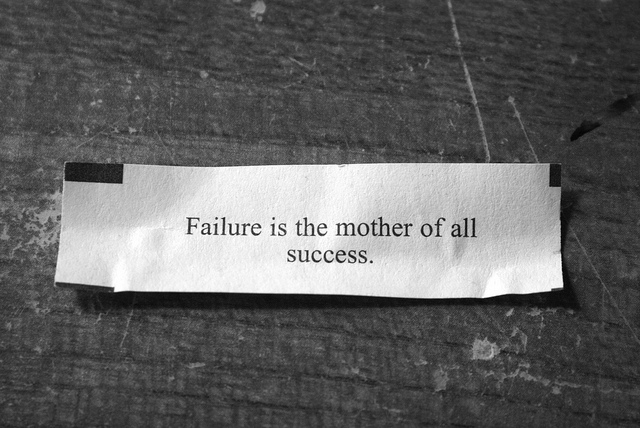 I’ve got a problem. At least, I used to. Success freaked me out. I thought I wanted to be successful, but I really didn’t.

Oh, I’d think a lot about wanting to make more out of my life, to do something that filled me with passion and excitement, but I never bit the bullet and did it. You know why? I was scared I’d fail.

Failure, to me, meant saying I was going to do something publicly, trying to do it, and then not being able to do what I wanted to do. I’ve always been like this, for as long as I can remember.

As a matter of fact, one of the earliest memories I have is of me playing baseball. I was probably seven years old, maybe even younger than that. I loved baseball (still do), and I was pretty good at the fielding part. I played shortstop, which isn’t a position where you can hide someone who’s not very good. If you want to hide a seven year old, you send him to the outfield, so he can pick dandelions.

I was terrified of hitting, though. Not because I was scared of the ball; I just didn’t want to hit the ball. I thought it would be the most embarrassing thing in the world to make an out in a critical situation. So, every time I went up to bat, I prayed for a walk. I honestly never swung once the entire season.

Naturally, I ended up striking out a lot. Same result as I would have gotten had I swung, without the opportunity to ever get a hit. That thought never crossed my mind, though.

Finally, the last game of the season, my dad finally said something to me. He realized what was going on, I think, and explained to me that I never had a chance to get a hit if I never swung the bat.

So, the last at bat I got in that game, I swung. And you know what?

I struck out. Again.

But, after the game was over, my dad told me he was really proud of me. And his words started to sink in. I realized I had to be willing to fail in order to succeed. To my young mind, this was a new thought; one I’d never really considered before.

Is this kind of situation playing out in your life?
Here I am now. I’m 32 years old, and I’m still scared of putting myself out there. I think it’s natural for pretty much everyone. We think that, if we say the way we’d like things to be in our lives (whether it’s professing love to someone, or admitting we’re dissatisfied with our jobs, or wanting to go back to school when we’re definitely past our college years), people will laugh at us. They’ll beat us back into conformity with everyone else, and that won’t feel good.

I once heard of an experiment that was done with a group of chimpanzees. These chimps were placed in an enclosure that had a pole in the center. On top of the pole was a platform that had a treat on it (bananas or something). Whenever one of the chimps would try to climb the pole to get at the treat, the researchers would hit the group of chimps on the ground with water from a hose. Eventually, if one would try to climb the pole, the others would grab it, to prevent the group from getting sprayed.

After a while, the researchers quit spraying the chimps. The chimps behavior, however, continued. They still kept anyone from climbing the pole. After a while, none of the chimps tried to climb the pole anymore.

Think about that. None of the chimps even knew why they weren’t supposed to climb the pole, yet they all enforced it just out of habit. Because that’s the way it’s always been.

People behave in the same way. If we try to do something extraordinary with our lives, and we tell people about it, we’re worried we’ll be ridiculed for it. Mocked and shamed into conformity. People tell us it can’t be done, simply because they’ve never seen anyone do it before.

Well, I think it’s time that it stopped. Thumb your nose at the rest of the chimps and climb the pole. Do what you want to do, and don’t worry about what other people think.

These are the lessons that I’ve learned since that day I struck out in Little League:

One of the things that always concerned me about goals was hearing all of these “self-help gurus” saying you have to set huge, aggressive, audacious goals for yourself. The implication was that if you don’t dream big, you might as well not bother. That always put me off, because I’ve never wanted anything really big in my life. No huge mansions or Ferarris, no yacht in the Caribbean.

I came to believe that everyone needs to start somewhere. If you have a lot of credit card debt that you want to get paid off, that’s a fine dream. There’s nothing wrong with your dream of a debt-free life. You don’t have to want to build a multi-million dollar business in order to put the power of dreams to work for you. Just start dreaming, and however big or small they are is good enough for now.

It’s taken me over 25 years to fully absorb the lesson my dad tried to pass on to me that day on the baseball diamond. I’ve finally started to put something out there to the world that’s reflective of who I truly am, without shame or apology. And I’m finally happy with who I’m becoming. I’m pressing on to be a better person, and, even though it scares me every time I hit “publish”, I’m learning to enjoy the butterflies. Because I’m starting to be who I’m supposed to be.