Man Cave Basics: Things You Must Have To Equip Your Man Cave For Maximum Relaxation, Style and Comfort.

Written and Published by David on June 28, 2013 - Reviewed by Dumb Little Man 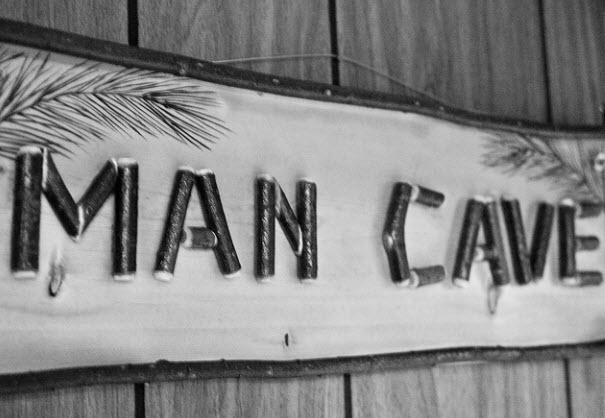 “Man Cave” is one of those annoying phrases that has swept through the culture and reduced a sacred space and concept into something trashy and ridiculous.

There’s a certain propensity to reduce all male enthusiasms to their most childish equivalent, making all men into eternal boys who play games, are stunted emotionally, and never grow out of their adolescent obsessions.

The fact is, everyone likes to have a bit of space that they are free to decorate and use solely according to their needs. When you get married or cohabitate with a woman, most of the house becomes shared space. What’s wrong with a small spot where you can do what you like?

So, you’ve won that argument and the Queen of your house has generously granted you carte blanche to choose from any of the under-used areas of the house for your so-called Man Cave. First and foremost then, choose that space wisely:

•    Make sure it’s wired for power and anything else you need – if your WiFi is strong enough you may not need a dedicated Internet feed in there, but think about it.

•    Make sure it’s big enough for what you’ll use it for. If it’s just a place for you to play video games and watch forbidden videos, a small office space may be perfect. But if you envision the guys coming over to watch the game and then some forbidden videos, make sure you claim a space of sufficient size.

What you put in your Man Cave depends on what you’re into. The important thing here is to keep it personal. Don’t worry about what you see in magazines, or what your pal did in his house. Think about what you’re going to use the space for and equip it for that. Here are some suggestions:

•    Big TV. Televisions keep getting larger, so Go Big. The larger your TV is today, the longer it’s screen size will be acceptable. Heck, we once thought a 40-inch TV was ridiculously large – remember those innocent days? Whether it’s for movies, Football, or video games – or all three – no man ever expressed regret on buying the largest television he could afford. Pro Tip: Have that sucker professionally wall mounted.

•    Wireless Media Streamer. Some of the new TVs have the capability to handle a DLNA server built-in, so you can stream your music and videos directly from your desktop over the WiFi network. If yours doesn’t, consider a streaming device from Roku or Sonos. Without cluttering the place with wires you can instantly have whatever entertainment you want in the room.

•    Furniture. This gets overlooked. Don’t buy the latest TV and streaming technology and then dump some moldy old sofas in there. Think about what the room will be used for – recliners with cup holders are great for movie nights, but plush couches are great for game day.

•    Fridge. This is the number one missed opportunity in Man Caves. A small fridge with a freezer will only run you a few hundred bucks, but it’s priceless because you won’t have to trek up to the kitchen every ten minutes for a round of beers or some more guacamole. Toss a microwave on top and your family might not see you for days.

A Man Cave can be the ultimate getaway. But don’t let the name fool you. You’ll know you did a good job when you continually find your wife, your kids, and your in-laws down there, eating your food, drinking your beer, and watching your Forbidden Videos.