All In! Life Lessons From A Gambler

Written and Published by Early Jackson on August 4, 2014 - Reviewed by Dumb Little Man 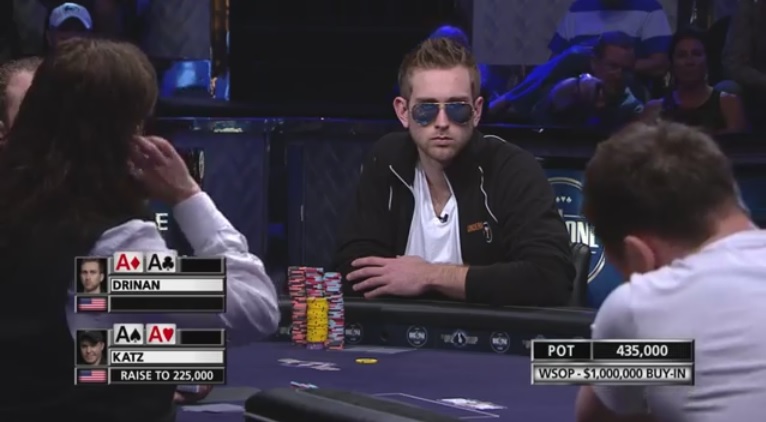 If you were given a 99 percent chance to win at a hand of poker, you’d jump on it right? What if I threw in the fact that you’d be dealt pocket aces, even better right? A few days ago World Series of Poker mainstay Connor Drinan had this very situation. What I am referring to is the WSOP’s Big One for One Drop, a straight up challenge tournament pitting players head to head in a showdown that boasts a $1 million buy-in. (For those like me who have never played poker, that’s a fancy way of saying it costs $1 million join the fun) That sounds insane until you realize the winner gets nearly $16 million in the pot to take home!

I caught the replay on ESPN via Sports Center and was blown away. Connor Drinan was head to head with Cary Katz when both got dealt pocket aces. Here’s where it gets interesting. In true drama and poker fashion, Drinan and Katz who are both known for their cool demeanor, begin to realize thingswere about to drastically change. Remember, pocket aces are the best possible hand you can begin in “Texas Hold ‘Em” poker, and naturally each guy thought he had the other by the diamonds. They raised and re-raised, and once the flop came, it dawned on Katz that things were turning in his favor. Katz even shared a bit of wisdom to Drinan when he said, “Save your money, kid. You can’t win every pot.”

What Drinan thought was simple poker trash talk turned out to be a psychic warning. With just about all the cards hitting the table, Drinan and Katz were both looking at a 98 percent chance of splitting the pot, and each had a 1 percent chance of winning it all. How about those odds?

Katz won on a flush draw, leaving his opponent across the table stunned to say the least. Drinan ended the night in 18th place and walking away little to show except the worst bad-cards story in poker history. This got me to thinking about life and how much guts it really requires for us to go “All In” for our dreams, family and our businesses.

Here are a few things to remember:

• The first thing to do is define what you’ll be passionate about: It’s always funny to me how much advice there is out there on pursing your passions. The problem is the folks giving the advice have no idea how others define ‘passion’. First and foremost your passion is YOUR business. That means I can give you generalized advice, but ultimately you have to define for yourself what that looks like. If you don’t do this, you will float aimlessly from pillar to post seeking guidance that never works.
• Keep your poker face straight: We live in a world plagued with over-sharing. From the boom of social media, it has become acceptable to plaster the web with all of your personal business all the while asking for privacy. That’s laughable at best. In poker, just as in life you have to be aware of how much information you’re leaking out. Making moves, being diligent and most of all, keeping certain things to your self can be the deciding factor between victory and defeat. I always tell clients a good rule for success is, “Less talking, more working.”
• When your hand mandates it, go All In: This is where it gets dicey. The world is filled with dreamers and well-wishers, but very few are willing to put their money where their mouth is. The bottom line is we all are either working for someone to build their vision or working to build our own. The former requires little to no gusto. The latter will take your heart and soul. Be prepared for people to criticize your efforts but remember, those criticizing are usually interrupted by those following their dreams.
• Live without regrets: You will make good decisions and you will make decisions you learn a valuable lesson from. But none of them are necessarily bad. The key is to glean experience and lessons from each decision of your life. As you build this catalog of wisdom, life opens in a brand new way. You are able to travel down a path and even when it looks horrific, you can still live free from the weight of regret.

Commentators are saying this wasn’t such a “bad beat” as far as poker goes. Both players were well within their rights to go “All In” based on the hands they had. It was just one of those things that go to the luck of the draw. Win or lose, Katz and Drinan are incredible at their game. Sometimes it just doesn’t fall for you. Personally it would be hard for me to live with the reality that I left 16 million on the table. But for professional gamblers, this is par for the course. The lesson to retain here is that we generally live a life within the confines of how much we are willing to wager. If you have the guts to go big, you can expect some loss, but you also can expect a life that’s pretty grand too!