Written and Published by David on September 12, 2013 - Reviewed by Dumb Little Man 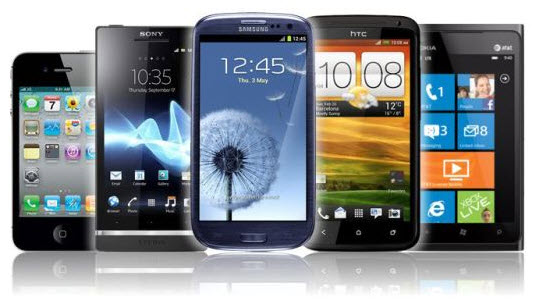 This is the biggest week of the year in the smartphone industry, because Apple just unveiled its latest line of iPhones.

The iPhone 5S and the iPhone 5C are sure to be among the top sellers of the year, but they’re not the only in-demand smartphones of 2013.

Here are the facts about Apple’s latest iPhones as well as eight other phones worth checking out.

There’s now a huge variety of smartphones to choose from with a wide selection of features and at prices ranging from free with a two-year contract to several hundred dollars without one. Want an extra-large screen, a great camera or a phone that’s waterproof? Check out these ten smartphones, all available now or by the end of September.

Last year, the Samsung Galaxy SIII became the first smartphone to really give Apple’s iPhones some major competition. As good as the Galaxy III was, the Galaxy IV is even better with a great big 5” display, microSD card, removable battery and a bunch of software enhancements. The 13 megapixel camera lets you erase photobombs and shoot with the front and back cameras at the same time. Many reviewers considered the Galaxy SIV to be the best smartphone of the year. The Galaxy SIV is available from most carriers for $200 on-contract.

Using the HTC One is like driving a Cadillac—the sleek metal body looks hot and feels great, plus there’s power to spare under the hood. The 1080p 4.7 Super LCD 3 display is big and bright, and the HTC is powered by a quad-core 1.7 GHz processor and 2GB of RAM. This phone comes in 32GB or 64GB models and comes equipped with dual mikes, front facing stereo speakers and an ultra pixel camera with optical image stabilization. The HTC One is available for about $200 on-contract from the four major carriers.

If you’re in the market for a Windows Phone, the Lumia 1020 is a good choice. With its awe-inspiring 41 megapixel camera, the Lumia is perfect for photo buffs, since it delivers the best low light experience you’re likely to find, along with the manual Nokia Pro Camera utility that takes camera phone imaging to a new level. This phone also comes with other exclusive Nokia apps like HERE Maps turn-by-turn voice navigation, Nokia Music+ and wireless charging. The Nokia Lumia 1020 is available for $299.99 with a two-year contract at AT&T. Pricey—but worth it if you enjoy taking photos but don’t feel like springing for both a new phone and a new camera.

We’re just getting going here so make sure you keep reading for more of the hottest smartphones that are hitting the streets.

If you want the biggest screen you can get, this smartphone sports a 5.2” display with a 2.65mm bezel and no buttons on the front. On the inside, the G2 has a speedy mobile processor, 2GB of RAM, 13-megapixel camera with OIS and 3,000 mAh battery. Powered by Android 4.2.2, the G2 offers lots of features like 24-bit/192kHz audio recording and playback. The LG G2 sells for about $200 on-contract.

This phone is available from all the major carriers, but only AT&T lets you personalize the Moto X by choosing from a wide array of back colors and accent hues. You can even add an inscription if you feel so inclined. Super features include advanced voice control and the ability to launch the 10-megapixel camera with just a flick of your wrist. The Moto X wins raves for long battery life and sells for about $200 on-contract.

A waterproof smartphone might sound like a gimmick, but if you’ve ever had to replace one after having it get waterlogged, a phone that’s drown-proof sounds like a pretty good idea. The Samsung Galaxy Active is basically a sturdier version of the Galaxy SIV that’ dustproof and can survive being submerged in one meter of water for 30 minutes. Like the SIV, the Active has a 5” 1080p display and a speedy 1.9 GHz quad-core processor. It’s a bit heavier than the SIV and has just an 8-megapixel camera. The Samsung Galaxy Active is available for about $200 on-contract at AT&T.

The fortunes of BlackBerry have fallen drastically over the last decade, as the company that pioneered the smartphone fell to the bottom of the heap as other cellphone makers introduced newer, sleeker, more modern devices. Still, the BlackBerry has its fans, and it’s those fans who’ve made the Z10 a favorite. The Z10 combines a 4.2”display with the familiar BlackBerry Hub that lets you see all of your accounts and messages at once. The touch keyboard with its flick-typing capability makes texting fast and easy. The Z10 sells for about $100 on-contract.

Can’t decide whether to buy a new smartphone or a tablet? Get both in one device with the Galaxy Mega, a “phablet” with a huge 6.3” display. Not only is that big screen great for watching movies or playing games, the Mega’s Multi Window feature lets you use two apps at once, side by side. The Mega doesn’t have all the bells and whistles of the Galaxy SIV, but if you want a really big smartphone, this is a good bet at $150 on-contract.

There has been a ton of hype leading up to the unveiling of the newest iPhone models.  Keep reading and see what Apple has come up with for the next generation of iPhones.

Apple has just revealed a pair of new smartphones, and both of them are sure to be best sellers. The top-of-the-line iPhone 5S is the same size as its predecessor the iPhone 5 with a 4” display. The pricier of the two phones has a metal case and comes in gold, silver and gray. On the inside, the 5S has a faster processor with Apple’s A7 64-bit chip and iOS7 software. The most talked-about new feature of the 5S is the fingerprint scanner called Touch ID that can allow the user to unlock the device by simply touching the sensor. (It remains to be seen whether this sensor will store fingerprints in places where they can be accessed by others.) The iPhone 5S will be available for order on September 20 with on-contract prices of $199 for the 16GB model, $299 for the 32GB model and $399 for the 64GB model.

If you’re one of those frugal buyers who loves Apple products but is too cheap to buy the latest model on the day it comes out, the company has the perfect phone for you. How about a phone with all (or at least most) of the features of the iPhone at an Android price? The lower-priced 5C is the same size as its more expensive cousin, with a 4” display and 8-megapixel camera. The main difference in the two models is that the 5C is encased in a seamless plastic shell and comes in five colors: white, green, blue, rose and yellow. The 5C does not have Touch ID. The iPhone 5C will be available for order on September 13 and hit stores September 20. On-contract prices are $99 for the 16GB model and $199 for the 32GB model.

Smartphone prices are constantly changing as carriers and retailers offer special deals on certain models. If you have your eye on any of these, look for the best prices of the year over Black Friday in November.

Now that you have decided on your new smartphone be sure you don’t miss this list of 14 Great Apps For Getting Organized.