I am going to skip the background on the story here because it’s obvious. For 2 years I’ve had a major bee and wasp issue around my house (and I hate bees). A few months back I tried to put an end to the madness so I can enjoy eating outside or playing with the kids. My strategy is still working and I have no bees.

Here is what I did and what I learned:

Identify the situation: If you have 2 wasps flying around it’s no big deal. However, my yard is a half acre and there were about 15 consistently flying right around the patio. Bees and wasps don’t generally come in those numbers unless a nest is nearby. So I think I identified that I have a nest (or nests).

Check out the area: The front of my house is all brick and a sandy color. The sides of the house are sandy colored siding and wood. Guess what, hives are sandy colored as well. After carefully inspecting the 2-story house, I found 4 golfball-sized hives and one more that was larger – the size of a baseball. I have no idea how I never noticed them before, nevertheless, I had 5 problems (see image).

Assessment: I am pretty skiddish around things that sting, (i.e. I don’t run like a school girl but I do instinctively jump – high and far – when I hear the buzz) and I have 5 nests, that are high – 30-60ft off the ground. There is no way for me to seriously get on a ladder and swat these things and/or the nest. I would be hung out to dry and most likely scared enough to jump off the ladder. 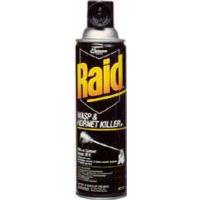 First Move: I am fortunate enough to have 2 Home Depots, a Lowes, a Sears, an Ace, and a Mendards within 2 miles from my house. So I chose the little guy, and I went to Ace. I bought a product by Raid that claimed to ‘kill on contact’, ‘kill the entire nest’ AND shoot 20 ft. Damn, that sounded like a winner to me. (see image)

The Planning: I was relatively lucky. 2 of these nests were within 20 ft. of a second story window so the Raid would hit them. 2 of them were practically on the window and 1 was about 30 feet from a window. I gave this some thought and decided to suit up and just do what I had to.

The kill: I strapped on 2 sweatsuits, 2 ski-masks, and my Cubs hat. The 2 nests 20 ft. away were simple, I doused them and it was over.

The 2 very close to the window were tough – 6 wasps got in the house and it took me an hour to corral and take care of them. During combat, I was stung on my ankle and my cheek. I was puffy-face for a few days. 2 flew out a bathroom window that was open in the room and the other 4 I somehow smacked with the flyswatter I brought in with me.

The last nest required me to scale the roof of my house until I was close enough for the kill shot. I was semi-ambushed as if they knew what was happening but I literally sprayed and the dove back in the house. 1 over ambitious Luke Skywalker wasp followed me in like he was the wasp savior or something, but I ended his cause after a 45 minute struggle.
The lesson:

* DO NOT KNOCK THE HIVES DOWN. It has been 2 months since this all took place and the hives are still there. Why? Simple. I know that wasps and bees like to build in those areas. If they are already occupied, they will look elsewhere. Since I did this, I have not seen more than 1 bee or wasp anywhere.

I am in pretty bad shape and I did this, however, I have a male ego that tells me I can do anything Rambo style. I would not necessarily do these things if you are not agile.

Further Prevention: This entire episode of bee and wasp killing literally sucked, mainly because I feared being swarmed, stung 1000 times, etc. I did a little research after the fact and found some tips on prevention:

* It’s hard to get rid of bees because it’s sometimes hard to find the source. Here is a great bee trap. Take a plastic pop bottle (16 or 20 oz. will do) cut the top off and insert it in upside down. put a couple oz.’s of mt.dew at the bottom. The bees will go straight to it and leave you alone on your porch. Make a couple of them and empty and change pop once a week.

* If you know where the nest is and there are hundreds of bees, you can try something that worked for us. We put a bug zapper right in front of the “main entrance” of their nest while they were sleeping at night. We then turned it on during the day. As they flew in and out they died by the hundreds. After a few days I think they either moved to a safer location or we had killed them all.

* We had a hive inside of a window frame so we took a rag covered in rubbing alcohol placed in to cover the hole and the bees could not get back in or out.