Giving Thanks For Going Without This Thanksgiving

Written and Published by David on November 17, 2013 - Reviewed by Dumb Little Man 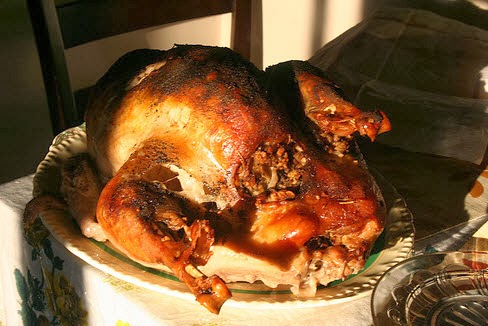 It used to depress me slightly when the fourth Thursday in November came and went with almost no recognition of the significance of the day.

Living in the United Kingdom, canned pumpkin is seen as “exotic,” Kraft Stove Top stuffing has to be replaced by either the real, homemade stuff or boxes of inferior dried stuffing mix, and all the turkeys are spoken for until Christmas. Such is life when you’re trying to celebrate Thanksgiving in a country that, well, doesn’t.

But this year, I’ve decided to have a different attitude about Thanksgiving.

I will, as I do every year, still host the kind of feast befitting any red-blooded Midwesterner, inviting friends who can claim some flimsy connection to the USA to join the festivities. We will eat far too much and fail to clean up the kitchen in favor of flopping down in the nearest soft, quiet spot in order to service our respective food comas.

The lingering whiff of leftover turkey will permeate the fridge for days, if not weeks, evoking that slightly queasy feeling that comes with having indulged much more than is advisable. There will never be enough pumpkin pie, and there will always be too many uneaten mashed potatoes.

What I won’t do, however, is lament certain trappings of the Thanksgiving period that most Americans take for granted. There may even be a few ideas for anyone already feeling the Turkey Day pressure. So put down the baster, sit back and be thankful for the things you don’t have to do.

My liver won’t go into shutdown. Ostensibly, Thanksgiving is about food and family, or at least spending time with loved ones. But for those between the ages of 21 and, well, old enough to know better, the run-up to Thanksgiving means the biggest bar night of the year. It’s just what happens when friends and siblings who haven’t seen each other in a year gather in the same general vicinity with the prospect of no work or classes the following day, and plenty of greasy food to offset the hangover. It’s not pretty and, even though it’s been a good decade since I’ve done the Thanksgiving Eve bar crawl, I won’t miss it – just as I won’t be overcome by dry heaves while removing a raw turkey gizzard at 6 a.m.

I can tune out the travel chaos as I glide around picking up last-minute ingredients from grocery stores that are not only open, but delightfully free of lines and panicked shoppers since it’s just an ordinary weekday in England. There will be no battling through baggage carousels, or trying to avoid ice slicks on I-80 or diving over children and old ladies for the last can of sweetcorn.

Speaking of which, I can cut out the slimy green-bean casserole if I feel like it, refuse to force a collaboration between yams and marshmallows or reject making vile-smelling gravy out of turkey innards just because that’s the way my mom does it. This is Thanksgiving my way, and if my Brit-Yank children prefer simple steamed broccoli to having it covered it in a weird amalgamation of processed cheese and cream of mushroom soup, so be it. There will be homemade cranberry sauce, however, even if I have to order Jello from eBay and eat the whole jiggling creation on my own.

Strange, historically inaccurate and culturally insensitive Thanksgiving “decorations” probably made in China, possibly using child labor will not cross my threshold. Even if I could source jolly Pilgrim-and-Indian salt & pepper shakers in Britain, or find a giant plastic platter emblazoned with an overflowing cornucopia, or buy hideous candle holders made to look like oddly unperturbed gobblers, I’d rather not. Ditto on the holiday cardigans. Native Americans have had it bad enough without becoming the centerpiece of some ludicrous knitwear. Stick to the snowman sweaters if you must! 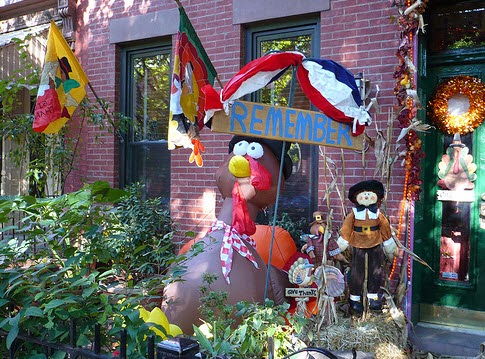 Black Friday. The mere mention sends shivers down my spine. Are we really so slavishly devoted to the pursuit of materialistic garbage and the latest i-Thing that we have to clamor out to stripmall-land at an inhumane hour while people who should rightfully be at home with their families are forced to negotiate with us, all for the privilege of a minimum-wage paycheck and very sore feet? Can we honestly not wait until a sensible time and maybe even visit a local independent retailer for Christmas presents that will, I don’t know, not be obsolete by the time 2014 arrives? Call me a cranky old hippie, but I’d rather knit my own flaxseed-and-llama-fur yogurt than go within five miles of a big box store on the day after Thanksgiving. Or any other day, for that matter.

On that note, have a very Happy Thanksgiving, and may your cornucopia runneth over.