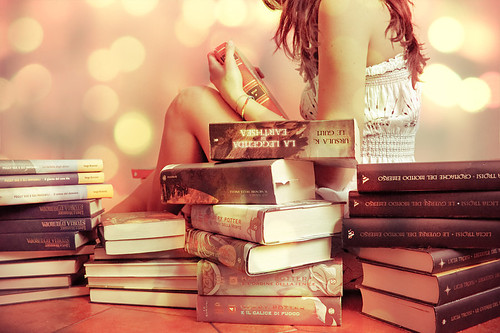 Valentine’s isn’t just for lovers; a National Retail Foundation survey found that more than half of Americans give gifts to family members, and many also give to friends and colleagues. Of course, traditional Valentine gifts—costly trinkets that end up tucked away in a jewelry box, impersonal sweets, or an overpriced meal in a crowded restaurant—are counted a success if they make the recipient happy for a day or two. These gifts can be costly to the giver, and add clutter to the recipient’s life. This year, think outside the (candy) box: ask for a life story instead.

Our beloved mother/grandmother completed her 96-year life this summer. Afterward, we revisited an informal autobiography that she gave to children and grandchildren some years ago.

Born on a small farm in Nebraska, Ruth neither minced words nor embellished her story. She mentioned her father’s death the year before she graduated from high school, and the subsequent start of her working career, writing: “I enrolled in Junior College but didn’t like it and quit after one semester. The tuition as I remember was $50.00 per semester and since that was a lot of money, and my Mother supported us renting rooms and serving meals to several men she didn’t have money to squander when I didn’t like school. I decided I needed to go to work.”

We shared Ruth’s autobiography with friends after her death. Not only were they fascinated by her story, many encouraged their own parents to record their stories, and several plan to memorialize their own lives for their children and grandchildren. Here are five reasons you should do the same.

From early childhood we are programmed to chase the dream: complete college and beyond (not just any college, but the best one), land a great job with a high social and financial ceiling, raise our own generation of superstars, and retire in comfort to watch the cycle repeat. Ruth’s story described a successful day in 1933 as one where she had enough to eat, and in 1943 when she learned that her fiancé who was fighting in the South Pacific was still alive. When we face the curveballs of our own lives, such perspective, shared by those we care about, may help us realize that 1. We have it pretty good, and 2. Even daunting obstacles can be overcome.

2. That same perspective helps the reader to help others

Reading about others’ triumphs over adversity also affects how we guide the next generation. As parents, consumed by today’s challenges, we easily forget, or at least discount, the yesterdays we faced and overcame, and how the effort made us wiser, stronger, better. Tempted to coddle our kids or seeking to insulate them from harm or failure, we can instead reflect on how others’ failures made them stronger. When we recognize how we and others learned, intuitively, to avoid or minimize potential danger, then instead of hovering to prevent our kids from being confronted, we might teach them how to deal with confrontation.

Like most of the best gifts, this one promises something to the giver as well as the recipient.

3. Writing a life story can give a sense of meaning

Research in psychology describes how people manage the basic conflict between wanting to live and realizing that death is inevitable. One way to cope with this threat is to feel that you are part of a larger something that will outlive your physical time in the world. This idea is used to explain the appeal of religious systems, patriotism, or cultural values, for instance. But imagining future generations reading and appreciating your life’s narrative could also provide comfort for those contemplating the end of life, regardless of how near or far that end is.

4. Autobiographical writing improves clarity and can help you work toward goals

The very process of writing our life story may be worthwhile in itself, even if nobody reads it. Several programs of research in psychology have found that autobiographical writing helps people gain insight, into their own failures as well as the problems they face with others (e.g., a spouse). Writing—and revising—a personal narrative has proven to be a powerful intervention that can help people change their behavior, persist in goal pursuit, and improve their marriages (read more here).

5. Finally, autobiographies can help to forge a stronger relationship between giver and recipient.

An example from our own family bears this out. Ruth’s husband Bill won the Silver Star for gallantry in World War II, the highest honor conferred without an Act of Congress. Yet like most veterans, he refused to talk about his wartime experiences; Ruth’s autobiography notes: “He would never tell me what he received it for.” Finally, when Bill became terminal with cancer, his son convinced him to share his story. It turned out he had lead 40 soldiers up a hill to take out a machine gun nest, taking several lives himself, and watching his friends get killed.

Knowing Bill’s past put a new perspective on his present. A child of the 60’s, Bill’s son was adamantly opposed to the Vietnam War. He saw no point in dying, or killing, for a cause he didn’t accept. Bill’s response was that you went because your country said it needed you; no additional reasons were needed, and no refusal was acceptable. Not knowing the history, the son simply thought Bill’s reaction was robotic and bereft of independent thought. Years later, knowing the Silver Star story, Bill’s mindset made much better, if still not perfect sense.

What if grandma claims her story is nothing special? Don’t let her off the hook.

Even in the age of oversharing, maybe she, or you, finds it presumptuous to think that anyone would be inspired or even interested in your life story. Ruth probably felt the same way. In 8 pages, she described how she fell in love with California after seeing a sunset on the Pacific Ocean, heard about the bombing of Pearl Harbor on the radio while ironing clothes, and had to tell her own mother about the death of her brother who had been flying night maneuvers. She recounted her wedding, the birth of two children, volunteer work at the hospital, games of bridge, and the first time she ate fresh pineapple (on a trip to Hawaii at age 43, sprinkled with salt at the suggestion of the fruit stand proprietor).

None of these experiences changed the world, but reading about them, many years later, changed our own perspective on life at least a little. A gift that helps the recipient cope with difficulty, appreciate the important things, and overlook the clutter—that’s a really loving gift, and one that you might consider asking for, or giving, this Valentine’s.

Heather is assistant professor of marketing at the London School of Economics, with a background in social psychology; her father William is a retired attorney in California.