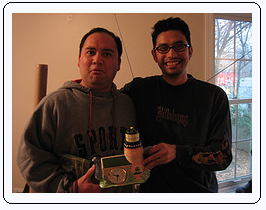 “Scandalously repackaging and claiming to have purchased on your own, a previously received hideous piece of crapola and giving it to someone else as if you had actually been thinking about what they would enjoy.” – Source: Urban Dictionary

Ok, I have done this once in my life and I felt pretty bad about it (for about 5 seconds). If someone gives me a bad gift that I hate, I see nothing wrong with re-wrapping it and giving it to your buddy, wife, or co-worker. Hey, it’s saves a little money and time and at holiday time, both are tight.

If you agree with me and tend to be as cheap as me, you’ll want to know how to get away with re-gifting. So here are a handful of rules that you can abide by.

To go a little further, there is actually someone doing surveys on regifting! Here are some 2005 stats from Regiftable.com:

How about you? Do you wrap old stuff lying around your house and give it as a gift? What are your limits on this?

Thanks to The Frugal Duchess, whose constant personal finance tips keep me in line. Her blog is also the one that pointed out the MSN article that lists these and other helpful regifting tips.