Written and Published by SJW on August 10, 2009 - Reviewed by Dumb Little Man 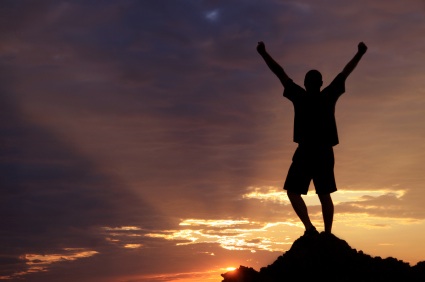 Motivation is a tough thing, especially if you’re in the midst of some difficult circumstances. If you’re at all like me, and things aren’t going the way you planned, you might have a tendency to fall into a funk. Instead of conquering the world, you might just want to put on some pajama pants, crack open some Ben and Jerry’s, and watch TV.

This is a poor solution to your problems.

Seriously, sitting around isn’t going to solve anything. You’ll end up feeling worse about your situation the less you do about it. And, if you keep up with the B & J, you’ll end up with a weight problem, too.

So, how do you motivate yourself if you’re not feeling motivated? I think the feelings are key to understanding the root challenge. You’re not always going to feel like doing something. You have to lead your emotions, not let your emotions lead you. Take one or more of these 8 eight concrete steps to inject some purpose into your situation.

This sounds a bit hokey to some, but it serves to keep your mind focused on what it is you’re working toward. It keeps your mind on the task at hand, even when there are many other things that are demanding your attention.

By having an accountability group, you put yourself in a situation where you’re not only afraid of losing face with the other members, but you also have people available to provide ideas and brainstorm ways to keep going when you get stuck. It’s amazing the things that members of an accountability group can accomplish together.

So, here are eight tips to keep your motivation up when you just don’t feel like it. It’s really all about fooling yourself into doing something that you know is good for you (like eating broccoli with cheese, right?). If there’s something I missed, or you have a story about how one of these tips worked for you, share it with the rest of us in the comments.