Written and Published by Mr. Self Development on February 17, 2010 - Reviewed by Dumb Little Man 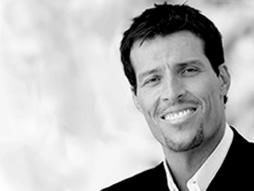 Tony Robbins is an infamous American self-help author and one of the top motivational speakers in the world. His bestselling books include Unlimited Power

and my personal favorite Awaken the Giant Within

Robbins began his career promoting seminars for motivational speaker Jim Rohn. He began working for Jim when he was 18 years old, and worked with him until he was 22.

Later Robbins began hosting seminars which included teachings on neuro-linguistic programming (NLP) which he learned from NLP co-founder John Grinder. Eventually Robbins incorporated firewalking into his seminars; this is something he learned from Tolly Burkan.

“One reason so few of us achieve what we truly want is that we never direct our focus; we never concentrate our power. Most people dabble their way through life, never deciding to master anything in particular.”

Nothing is more critical than focus. If you fail to reach your goal, it is because somewhere along the way your focus was “broken.” Focus is power; a focused person can accomplish more than 100 individuals who are merely interested.

“The truth of the matter is that there’s nothing you can’t accomplish if: (1) You clearly decide what it is that you’re absolutely committed to achieving, (2) You’re willing to take massive action, (3) You notice what’s working or not, and (4) You continue to change your approach until you achieve what you want, using whatever life gives you along the way.”

Wow, what a quote! This is the path to success.

Anybody can make excuses and say “you have to be lucky to succeed,” but the truth is, we all have the power to succeed, however we’re all not willing to do what it takes to succeed (that’s the difference). Most prefer to sit on the side-line, or play Monday morning quarterback.

“Any time you sincerely want to make a change, the first thing you must do is to raise your standards. When people ask me what really changed my life eight years ago, I tell them that absolutely the most important thing was changing what I demanded of myself. I wrote down all the things I would no longer accept in my life, all the things I would no longer tolerate, and all the things that I aspired to becoming. If you don’t set a baseline standard for what you’ll accept in life, you’ll find it’s easy to slip into behaviors and attitudes or a quality of life that’s far below what you deserve.”

To succeed you must raise your standard, you must begin to see yourself differently.

“Most people fail in life because they major in minor things.”

Give your time and attention to what matters most. Dedicate your life to doing big things; leave the little things to someone else. Learn to think big, to act big, and your life will take on a new direction.

“You see, in life, lots of people know what to do, but few people actually do what they know. Knowing is not enough! You must take action.”

Chances are you already have enough information to dramatically transform your life from the inside-out; you’re just not putting that information into action. It’s not enough to possess knowledge, you must act on what you know in-order to change your destiny.