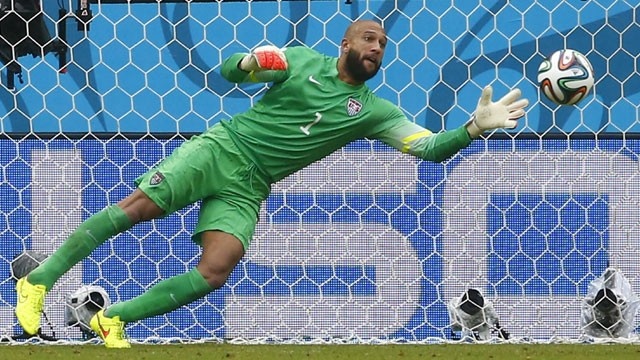 Sports metaphors for life are a bit cliche, and there wouldn’t be so many of them if there wasn’t something to it. As a large portion of the world comes to a near standstill, celebrating I wanted to take a look at the subtext below the dressing up in our country’s colors, drinking and cheering.

On the final day of the group games the USA had won its 1st game, drawn its second game, and was facing a superior opponent. If they won or forced a tie they would progress. If they lost they might not have progressed to the next stage of the competition, they were dependent on the result of the other game in the group. Though they lost on the night to Germany, the US ended up advancing to the next stage.

Each match they played contributed to the end result. In the same way, how we show up every day matters.

Whether you are competing for a promotion, learning a new skill or working toward personal change your best chance to progress is give it everything you have each time, every day. Some days you may fall short, others you may be a standout performer. The cumulative results, your performance over time, is more important than a single loss.

2. Being the Best Player In the World Means Nothing Without a Team

Arguably one of the best in the world, Christiano Ronaldo (you either love him, hate him or don’t know who he is), plays for Portugal. While they have many good players, you get the impression that Portugal’s strategy is defend, give Ronaldo the ball and hope he is having a good day. You get the feeling Ronaldo’s strategy is get me ball and get out of my way. Needless to say Portugal didn’t progress.

Over reliance on one person for the group to succeed is not a winning strategy. Its important to recognize your strengths and weaknesses. Don’t become over reliant on your strengths, ignoring your weaknesses. Build relationships with others that can support you in your goals. Don’t take all the credit when you win, don’t take on all the blame or accuse others when you lose. Building a team, a successful team, is a skill in itself.

3. Adapt to the Conditions

Teams at the World Cup in Brazil have been traveling over 3,000 miles every 4-5 days for one game. Even though its winter in Brazil temperatures in some of more tropical locations have been close to 100 degrees.

This had a major impact on how teams prepared between games and on their strategies and performance. For the first time in the competition’s history official water breaks were instituted.

Pay attention to your surroundings, the conditions, your own health, fitness and clarity of mind. Plan accordingly. If you are sick and have an important presentation that can’t be rescheduled plan out what you need to do to be at your best. Reserve your strength. Maybe you realize you can’t do the who thing yourself. Ask a colleague take on some of the additional work or plan in a break where you can recuperate.

Similarly, if you had a bad day, when you come home to people you care about, let them know what you need. If you need time alone that is most likely a better option than starting a fight because you are in a mood.

Looking at ourselves and the circumstances around us gives us an opportunity to adjust. Being at our best isn’t a static thing. We need to adjust.

4. Being the Favorite Doesn’t Mean We Will Be Up For the Challenge

Spain, one of the overwhelming favorites for the tournament, bombed out of the group stage. England, who often claim to have the best domestic league in the world, did as well.

Whether it is the conditions, team dynamic, or just meeting better opponents on the day, success is never guaranteed on reputation and past performance. The cliched saying (and movie title) “on any given Sunday” comes to mind.

Even if you have a disadvantage, act like you can win. Confidence is important, and if you give everything you have, on that day, it may be more than you need.

Don’t take victory or success as a given because you are more accomplished or have won before. Each challenge is an unknown, to some degree, and cockiness can blind us to our weaknesses. One moment of distraction can cost you everything.

5. Step Up When You Are Called Off The Bench

We don’t all get a starting role. Whether a grizzled veteran or young up and comer, sometimes we start the game on the bench.

Two of the US’s goals came from substitutes, young teenagers. Germany’s 36 year old veteran Klose tied the all time total for goals scored at a World Cup coming off the bench and earned a starting place for later games.

Whether as a new comer, by circumstance out of our control or because of past poor performance most of us have found ourselves sidelined. Becoming bitter or giving up shouldn’t be an option. Keep training, learning, growing,building your skill set so that when your turn does come you prove the point.

Jeff is a Integral life coach, writer and yoga teacher.