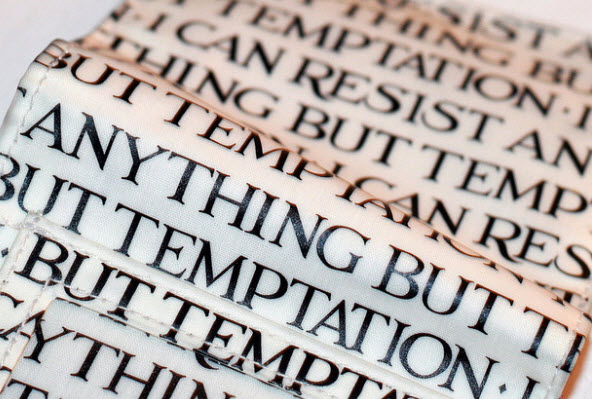 I’m not talking about big resistance like getting fired, but the subtle, more common kind of resistance we all experience every day. Let me explain.

Imagine that you’re working on a big project such as writing a book, building a chair, solving a math problem, or planning your day. At some point in this project, you’re likely to hit a minor snag. Perhaps you can’t think of what to write next in your book, you need more glue for your chair, you’re not sure of the correct math operations, or you can’t decide whether or not laundry needs to be done today or tomorrow. What do you do?

People in this situation will respond one of two ways, and how they respond in one area is likely to be repeated in other areas as a consistent habit. Put in this situation, people either deflect their attention or push back.

The Peculiar Challenge Of Small Resistance

Option 1: Resistance Pushes You, Deflecting Your Attention To An Easier Task

Jim’s thoughts: “The next plot twist in the book I’m writing would take a lot of thought and I might have to rework the backstory. Oooor, I could play Candy Crush Saga level 409 right now!”

Jim’s attention has been deflected. If you’re a visual learner, picture the increased challenge of an important project as a small hill in the project. This is a bit what it feels like – you’re working and things are going smoothly until a sudden increase of difficultly arrives, and it’s not fun (but it can be!). So you turn around and head back down the hill for an easier path.

Until I noticed I had this problem, I would immediately deflect my attention to something easier. Taking the path of least resistance is an instinctual response for many people, because easy paths are a guaranteed success and reward for the brain. But the reward from completing a more difficult challenge is much greater and generally preferred in the long term.

This brings us to the second possible reaction to resistance – push back.

Option 2: Resistance Pushes You, And You Push Back Harder

Gary’s thoughts: “The next plot twist in the book I’m writing would take a lot of thought and I might have to rework the backstory. I could play Candy Crush Saga level 409 right now, but if I always quit when it gets tough, I’ll never finish this thing. Hmm… Oh, I’ve got it! The butler was his real father! Brilliant!”

Gary experienced resistance, and the popular Facebook game Candy Crush Saga entered his mind as an easy way out, just like Jim did, but he considered the overall implications of his actions, and how he’d feel about it later. And just like I’ve noticed happens when I push back against resistance, Gary got over the hill very shortly after he decided to continue forward.

If we can face giant challenges of resistance like sickness or major unfortunate events, then there is no reason why these small bumps in the road should stop us. But ironically, it’s these small bits of resistance that hold most people back in life. They procrastinate, they waste time using Facebook or watching TV, and they eat ice cream instead of raw broccoli. Those are easy paths with instant rewards, and they lack long term satisfaction.

How To Be One Who Pushes Back

If you want to be one who pushes back, the most important thing you can do is give your internal security guards some caffeine. You have to be alert to recognize when you’re encountering a small bit of resistance. Once you do that, and you have the right frame of mind (considering the short and long term), you can overcome these small challenges. Of course, it may not be easy right away; with practice comes improvement.

Consider that you’re not fighting against these small challenges alone, but against your own brain too, which has neural pathways that tell it to react in a certain way. So in recognizing these little resistance instances and moving forward, you’re reprogramming your brain to battle against resistance of all sizes. This makes it more difficult in the beginning, but later when you have the habit of pushing back, it will work in your favor.

As you might imagine, champions are made by never giving in to resistance at any level. For more on how to maintain focus in these tough bouts of resistance, check out my article on how to focus your mind instantly. Also, if you decide to sign up for my “Focus Tuesday” Newsletter, I’ll send you my eBook and 40 exclusive focus wallpapers for your computer, all free. If you’re interested, you can sign up here.