A Man’s Guide to Emotions: What Really Men Feel, And Why They Don’t share

Written and Published by Varun Pahwa on May 9, 2022 - Reviewed by Dumb Little Man 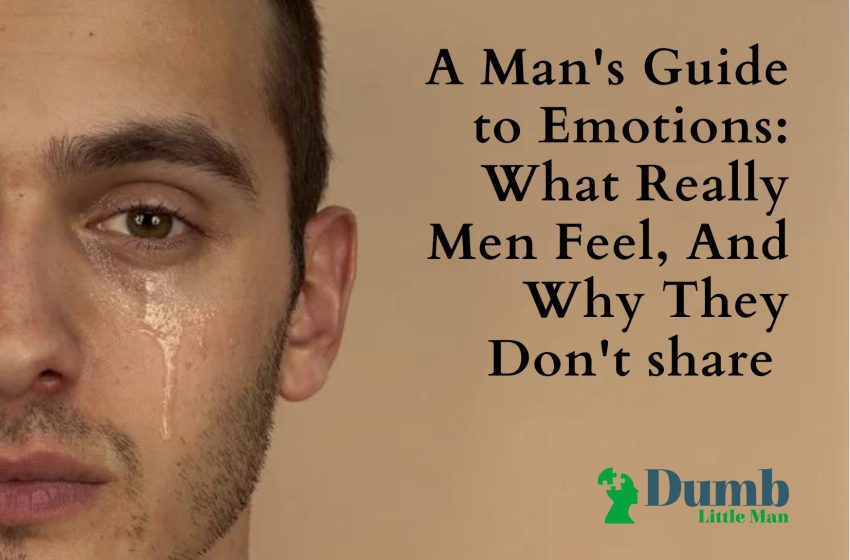 Emotions are an essential part of our human experience. They influence how we interact with other people, feel about ourselves, and even interact with the world around us. When it comes to emotions, men and women often have very different ways of expressing themselves.

Men are socialized to suppress their emotions, while women are encouraged to be in tune with their feelings.

But what exactly do men feel? What effect do emotions have on the way they act? And why don’t they share their feelings:

Why do emotions matter

Emotions are essential in nearly every aspect of life. It’s part of our biology and how we approach problems and the world around us. Understanding emotions is a crucial part of persuasion, whether we like it.

Emotions are essential for our mental well-being. They help us feel connected with others, allowing us to express ourselves. If you don’t let yourself feel what you’re feeling, you could be missing out on an opportunity to learn something about yourself or someone else.
Emotions influence our decisions and actions. We often feel happy when we see someone else smile. We also get angry when we see someone hurting others. Emotions are compelling. They can change our behavior and even our personality.

For example, if you feel sad all day long, it will be hard for you to smile. You may not even want to go outside. You may not want to talk to anyone. But if you suddenly start feeling happy, you will probably want to interact with other people.

Emotions are a driving force behind decision-making and behavior. Even if you don’t realize it, you make decisions based on emotions. Take, for example, the time you decided to choose one of the following products:

Emotions and men – What do they feel?

1. Men are not supposed to cry.

That’s wrong men can cry. They are supposed to feel.

They are supposed to be solid and robust, always holding it together and never showing their emotions. However, The problem is that many men can’t do this, and they struggle with the idea of feeling.

2. Men should not hide their feelings.

The times when men were expected to hold in their emotions have passed. Emotional repression for men is no longer a viable option. It takes a toll on mental health, and it can lead to physical health problems.

Men have long been perceived to be cold and distant. They don’t seem to show emotions and are often labeled as stoic and uncaring about their feelings. However, the truth is that men certainly do show emotions, but they may not be as expressive as women.

Human beings are emotional creatures, and men are just as emotional as women. However, men have been conditioned to bottle up their emotions.

Men are taught that it’s not very masculine to cry or express their feelings. And the patriarchy promotes the idea that men should be stoic, solid, and unfeeling.

This toxic conditioning has left many men unable to open up about their emotions when they need to – both with other people and with themselves.

3. Men are expected to be strong and silent.

They are supposed to be the ones who don’t talk much and instead act. But is that true?

Many men, who have a hard time opening up about their feelings, wonder if they are alone in their struggle to express themselves. And if it’s not just their problem, why do they have this difficulty in the first place?

Men share less than women, but they also feel more. They tend to internalize their emotions and suffer from depression more often than women. And yet, when it comes to dealing, we always look up to men.

What are the most common emotions that men feel?

If you have a man in your life, there are some emotions that he feels more often than others. Some of these emotions may seem similar on the surface, but they are very different.

Men feel love, joy, and sorrow more often than anger, disgust, or contempt. And it turns out that jealousy is an even less prevalent emotion for men than envy. The most common emotions that men feel are:

How do men and women differ in their handling of emotions?

Men and women are different. We all know that, but we don’t always realize how much our society pressures us to fit into narrow gender-defined roles. Men and women respond differently to stress and express their emotions uniquely.

It isn’t hard to see why men and women handle their emotions differently. Throughout history, men have been expected to be tough, strong, brave, and in control of themselves. On the other hand, women have typically taken on a nurturing role and have been encouraged to show emotional support to others without revealing how they genuinely feel.

The dangers of bottling up your feelings

We’ve all heard the phrase “bottled up anger” before. We understand it to mean that someone is angry and not showing it. It can be dangerous to bottle your feelings up because they may leak out in other ways you don’t want them to.

Realize this: bottled-up emotions can lead to physical symptoms… and health problems. Anger expressed negatively can cause hypertension and heart attacks. Anger of any kind is the most dangerous emotion for your health. It will increase the risk of cancer, gastrointestinal issues, and immune disorders.

How to deal with negative emotions?

Anger and depression are emotions that everyone has to deal with. As long as you’re human, you will experience negative emotions from time to time.

Anger, depression, and other negative emotions are a part of our life. They usually happen when we face failures, loss, or something we want to achieve but cannot.

Learning how to deal with them is the easiest way to overcome them. Accept that negative emotions are a normal part of life, and there is nothing wrong with feeling them. The problem arises when you don’t know how to handle them appropriately.

Understand what triggers your negative emotions so that you can control your reactions and stop these emotions from taking over your mind and body.

To Wrap Things Up

We ask men to be strong, stoic, and emotionless. This approach leads to a disconnect from their genuine emotions, leading to long-term health problems.

Instead of being ashamed about your feelings or suppressing them, you should accept and share them with others.
So, What is the most significant emotion you have felt in the past year? Comment below.

Hi there! I am Varun Pahwa. I’ve learned several lessons from some of my darkest life experiences. Join me at Uprisehigh where I share brilliant tips on personal development, relationships, life simplification, and a lot more. Share your stories with me at Uprisehigh and honor me with the opportunity to help you out with your problems.