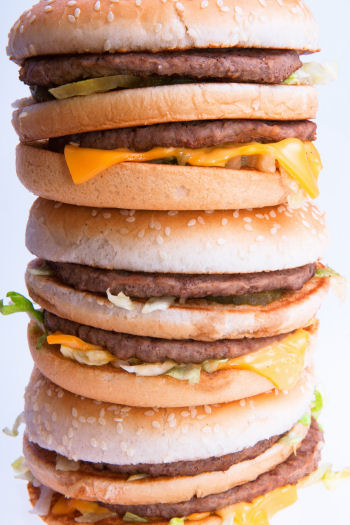 How can you kick junk food to the curb? Many of us have tried and failed, and tried and failed, and tried and ended up binging on Big Macs blended with ice cream, etc…< What we usually do is say, “After this bucket of KFC Chicken, I’m not eating this crap anymore!” Then we purge our house of all things sugary, we eat salads and whole wheat for about 3 days and then cave in the first time we drive past a Taco Bell. Where is the will power, the drive, the ambition you had a couple days ago?

That’s because we try to stop eating junk food without thinking about it – without planning our escape.

What we should do is worry about changing our habits. As Leo Babauta mentioned over at Zen Habits, forging new habits takes time and energy. If we want to kick our junk food habits we’ll have to give both. That’s why we’re going to:

After all, we’ve spent years building up these habits, we can’t expect to take them down overnight. We’ll do it smart, slow and consistent and we’ll kick junk food to the curb.

I’m going to separate the tasks into kicking crap snacks, kicking fast food and kicking pop (soda to you philistines). Pick whichever will be easiest for you and do that first. A taste of success is incredibly motivating. Then do the one that will be hardest second while you’re on an upswing.

This one’s probably the simplest. Not the easiest, but the simplest. You just keep downgrading every 2-4 weeks. Essentially switching terrible habits for bad and then switching bad for good.

How do we beat crack for the single male? Yes, that’s how hooked people are on this. How about this:

At the end of one week, you can add them all up and get a pretty good idea of how much you’re spending on this crap. Round that up to the nearest $10 and cut it in half. That’s how much you’ll spend a week from now on.

Take that money and put it in a ziplock bag that you keep in your car. All your fast food will be paid for out of this fund, and when it dries up, that’s it until next week. This will force you to ration and make choices.

Let it sink in for 2 weeks and don’t forget to plan this out. Something has to replace all that fast food you’re suddenly not eating. I suggest:

Then, when this new habit is a part of you, cut that dollar amount again, and again, and again until you’re happy with how much (how little) fast food you’re eating. I think under $10 a week is OK for most people.

The first step to kicking crappy snack foods is doing a food inventory. What do you have in your kitchen? Cookies, chips, candy? And what are you eating them for? Which are your comfort food? Stress foods?

Then we’re going to make a chart of all these snacks and for each one list a replacement snack. For example instead of potato chips you could eat tortilla chips with salsa. Now you can switch a crappy snack for it’s healthier replacement. But no more than one every two weeks (pacing). Make yourself eat the new food daily so it becomes a part of your lifestyle and remember to snack before you get hungry.

It’s a pretty straight forward process but here’s a few tips to make it go smoother:

The three keys to kicking junk food are planning, pacing and sticking to it. Remember to take as long as you need to get these new habits ingrained, 2 weeks is a minimum. Better junk food free in 1 year than relapsing in 6 months.

Written on 5/20/2008 by Garrett Whelan who writes about cooking for men or anyone trying to kick the fast food habit at FatBastardEats.com. Republished 3/10/2011.