How to Get Rid of Indigestion: Complete Guide 2023

Written and Published by Vanessa Richards on January 3, 2023 - Reviewed by Dumb Little Man 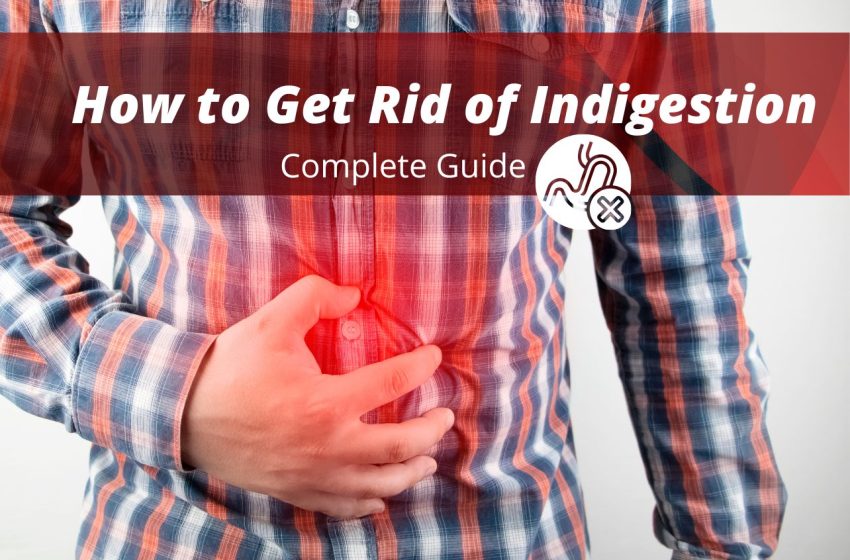 Our stomachs are incredibly well-equipped with skills to kill toxins and microbes. However, sometimes, the toxins and bacteria are so strong that our stomachs give up. This leads to digestive problems.

Medically, indigestion is frequently referred to as dyspepsia. It is a condition where your stomach fails to properly digest the food you eat.

In many cases, indigestion is caused by specific foods. However, indigestion can also occur due to internal abnormalities in your stomach or anywhere else in your digestive system.

The good news is that indigestion, although it can sometimes be chronic and severe, is mostly not a serious life-threatening condition.

How to Get Rid of Indigestion

You need food to survive, but, ironically, sometimes eating food can put you in a very risky situation. That’s because your stomach has some limits to it. It is incredibly strong, but people often overestimate its strength.

One of the most common stomach problems is indigestion. Indigestion is simply when your stomach fails to do its job. If you frequently feel discomfort in your stomach, it’s a sign that your stomach isn’t doing well (and so are you).

In most cases, indigestion occurs because of eating contaminated food or by imbalances in the stomach acids. There are symbiotic bacteria in your stomach that help in digestion. When the bad bacteria take over, they kill the healthy bacteria, which is why your stomach fails at digestion.

The point is that your stomach can fail to perform properly for many reasons. That’s why you should take care of your stomach and eat healthy foods.

The following are some of the common indigestion triggers or causes:

Eating food that’s contaminated by harmful bacteria, such as salmonella or E.Coli, is known as food poisoning. It can also be caused by a virus, such as a norovirus. Food poisoning worsens if you eat fatty or spicy foods

The H. Pylori bacteria can cause peptic ulcers in the stomach, especially in childhood. These peptic ulcers are one of the most common causes of indigestion in children.

It is a condition in which the pancreas swells and becomes fully inflamed. It is most common in alcoholics. The damage that alcohol causes to the pancreas can lead to chronic indigestion problems.

It is a condition in which the muscles of the stomach become damaged which paralyzes the stomach. Due to the paralysis, the stomach fails to digest food properly.

Indigestion may not be life-threatening, but you still should be very careful about the treatments you chose. People usually use antacids, antibiotics, or prokinetics; however, these indigestion treatments are never free from side effects.

Read along as we explore some really good natural remedies that are proven effective. Apart from that, we will also recommend you a supplement that can naturally reduce stomach spasms, indigestion symptoms, and other stomach issues.

If your indigestion is not very severe, the best way to treat it is to try some natural remedies that are scientifically proven effective.

Here we will highlight and explain some of the natural remedies that are both easy and effective.

Scientific research suggests that ginger is one of the most effective remedies for treating indigestion. Ginger is pretty common all across the world as an effective remedy to deal with digestive problems.

Ginger is not only good at treating digestive problems but also nausea, indigestion pain, and chest pain and can help you alleviate bloating as well.

You can eat ginger, add it to your food, or buy supplements that contain ginger extracts. Using ginger will clean your stomach and boost your immunity. You can also try ginger tea which is a pretty popular remedy.

Licorice root can help you ease indigestion because it has anti-inflammatory, antispasmodic, and digestive properties. People most commonly chew it; however, you can also put it in boiling water and drink the brew.

Make sure you always eat licorice root at least half an hour before eating or after eating. Make sure you don’t overeat it because it can lead to high blood pressure.

Indigestion is frequently associated with a bad taste in the mouth. Peppermint can help solve both problems!

Make sure you first confirm that your digestive problem is not because of acid reflux before you consume peppermint. You can also try peppermint tea if you do not have ulcers or GERD; otherwise, it can make indigestion symptoms worse.

Another great neutralizer of stomach acids is lemon juice or lemon water. You can drink lemon water/juice before eating to get rid of indigestion. Avoid consuming too much lemon water or juice because it can wear down your tooth enamel.

One of the things that may worsen indigestion is laying down horizontally. It can lead to severe symptoms, especially heartburn because the acids can reach your throat. The best alternative to this problem is to elevate your chest, neck, and head. This can give you immediate indigestion relief.

A bath with hot or warm water is one of the best ways to alleviate tension, cramping, and bloating. Apart from helping you relieve indigestion symptoms, a warm bath will also help you sleep easily. You can alternatively apply a warm compress to your body as well.

The market is full of digestive supplements and medicines, most of which may lessen stomach pain temporarily but leave you with severe gut problems that will stay with you for the long term.

You would like to have a product that works for all or most digestive problems and can cure indigestion fast. Luckily, we have got such a product for you, and its name is Digestyl, made by Bob Winston.

Research very clearly indicates that Clostridium Perfringens is among the major causes of digestive problems. Digestyl not only makes your stomach healthier but also your intestinal muscles. It can even cause fissures and hemorrhoids.

What digestyl basically does is that it gathers essential nutrients from its ingredients. These nutrients then, in turn, boost your immunity and enable your body to fight the monster Clostridium Perfringens.

Why is it Effective?

Digestyl can ease indigestion discomfort caused by any reason from the roots. That’s why it doesn’t just focus on temporarily eliminating bacteria and toxins from your stomach or intestines.

It boosts your immunity, enabling your body to cope with the current digestive problems and stay ready to deal with them in the future. It trains your body to kill the microbes on its own. This is a much safer and more sophisticated way of treating gut problems.

Why Should You Trust It?

Perhaps the greatest plus point to digestyl is that it is 100% natural. That’s why it repairs your digestive system naturally, leading to no side effects. Digestyl is manufactured in a GMP-certified facility and approved by the FDA.

Unlike other products, Digestyl won’t leave your gut untreated. That’s why you are 100% safe from irritable bowel syndrome if you use digestyl.

Bob Winston did a lot of research while coming up with this product. Digestyl has been proven effective through rigorous research, which is why the FDA approves of it.

While there are hundreds and thousands of digestive supplements and products online, we believe Digestyl is the best at getting rid of indigestion and other stomach-related issues. This isn’t just a claim.

Here is why we believe Digestyl is the best.

Click Here to Get Digestyl Supplement at Discounted Price.

How to get rid of Indigestion FAQs

Why does indigestion lead to stomach pain?

The main reason behind stomach pain in the case of indigestion is that the acid in the stomach harms the sensitive mucosa of your stomach, resulting in its breaking down and inflammation.

What is Stomach Acid?

What is Gastroesophageal Reflux Disease or Acid Reflux?

It is basically the backwash of stomach acid into the esophagus because of the abnormal functioning of the lower sphincter in your esophagus.

Vanessa is a mom of 3 lovely children and a software geek. Outside of her career as a health and wellness instructor. She enjoys writing and researching on topics such as finance, software, health and culinary.