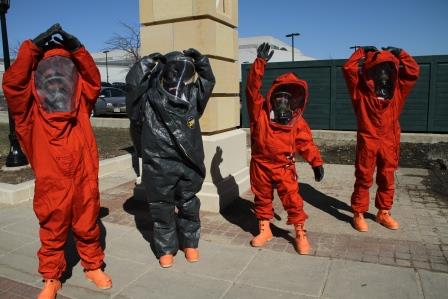 “Be kind, for everyone you meet is fighting a hard battle.” – Ian Maclaren

Are you waiting for someone smarter than you fix your problems? I was, but I have come to the conclusion that it’s not going to happen.

I go to bed every night wondering what the next day will be like. I’m wasting away. My legs are all but useless. Raising the white flag and hoping for a “Die Hard” style rescue isn’t practical.

I would love to think that “they” will come up with a weight loss solution that works, cure cancer, or stop my disease – multiple sclerosis.

The system is set up to fail. I can try to figure it out for myself or wither away while I wait.

Why haven’t you seen any significant “cures” in the last few decades? Disease is big business. Don’t get me wrong, I don’t think the government, drug companies, and doctors are in cahoots to keep us sick and fat and rake in the dough.

There’s no way that EVERYONE in a pharmaceutical company could keep the cure for a terrible disease a secret. What about ethics? Morals? What about their loved ones who are suffering?

They’re not Dr. Evil. At least not all of them.

So – why is the system broken? Why is taking the bull by the horns our best option? Our ONLY option? Here are eight reasons:

1) Enrollment in research studies is slow

Under perfect conditions, it would take around 10 or 12 years to invent, test, and approve a new drug. That’s under perfect conditions – which almost never happens! I enrolled in a phase 1 clinical trial (drug trial on people) in 2008.
They didn’t finish phase 1 until early in 2014! There are still two phases to go!
And, the FDA has to approve it at each step and they won’t do that without certain statistics. To get those statistics, the trials require more and more people for each phase. So that means that a slow organization is expecting more people with a particular condition to enroll in these tests, but they’re not actually asking.

The moral of the story? IT’S SLOW!

Let’s face it, the drugs we need aren’t coming anytime soon. A slow, government organization has to approve each step and a small subset of a very particular patient population has to enroll to make it work. That’s a tall order.

Let’s say that you own a lemonade stand and your neighbor has one down the street. Everyone comes to your stand because your lemonade is so much more refreshing. This is partially because you serve it at just the right temperature but partly because of a secret ingredient.

Are you going to share that information with your neighbor? No way! You’re going to keep it to yourself to avoid competition.

Drug companies work the same way. If they have an idea for a drug, they won’t share that information, even if it doesn’t pan out. They want to suppress cooperation so that theirs is the only game in town.

If they try something and it doesn’t work the way they planned, they tuck it away so that no one else can figure out why. Competition is too fierce and money is too tight to share the information. In the working-man’s world, we call that job security.

3) Creative minds are not welcome

You want your lemonade stand to work like a well-oiled machine, right? Why do you go to McDonald’s or Starbuck’s when you’re on vacation? Because you want a taste of home!

Big corporations spend a lot of money to train their employees so that a Big Mac tastes the same from New York to New Mexico. Someone that thinks and acts differently just screws up the system.

That’s how drug companies work. Who’s going to come up with that fantastic new cure for ALS or cancer? Someone who thinks outside the box – a “mad scientist!”

Is that the kind of person big pharma wants working for them? No way. They want consistency and predictability, not creativity.

4) Small companies with good ideas are bought out

So where do all of these creative scientists with great ideas go if there not working for a big drug companies? They start their own businesses.

Those fledgling companies might develop a fantastic new treatment and patent the idea so they have exclusive rights to it. This is why patents are such a big deal to “the sharks” in the show “Shark Tank.” If you patent the product, nobody else can profit from it.

So what would you do if you had seemingly unlimited income and some small-time inventor was threatening your blockbuster drug? You’d buy them out so the drug never makes it to market. As a matter of fact, this is often the “exit strategy” for start-up drug companies.

5) Grant cycles are too long

What about big research universities? They encourage creativity and inventiveness, right?

Have you ever heard of Parkinson’s Law? It says that work expands to fill the time available for completion. This means that there is no rush if you’ve been funded to take three years to answer your question.

Are you going to answer it in six months or a year? No way. Could you? Maybe.

Deadlines increase focus, which speeds up results. In the academic world, where a researcher’s job depends on the grants they bring in, there isn’t a rush to find a cure so much as to keep the money flowing. If I can stay funded for the next three years, that’s what I’ll do.

It’s a real chicken-and-egg dilemma. The feds fund academic researchers for long periods of time and the institutions get rid of the ones that don’t have money coming in. Finding a cure isn’t always high on the list.

You might think that universities run like a commune full of idealists and professors who collaborate first and ask questions later. Guess what – they have to put food on the table, too.

I said before that universities keep the researchers that bring in money. Two researchers competing for the same grant means poorer chances of getting that money. Are you going to tell a colleague about your new idea for a drug to reduce stress? I wouldn’t.

What about the student in your laboratory that becomes a professor at your same school? You’ve trained your competition – a colleague with expertise in your field that knows your technique like the back of their hand. After graduation, you’re going to zip it. It’s not bad form; it’s survival.

7) The Grass Is Always Greener

What happens when a new drug gets developed? You take it!

Desperate people will take it if there is a little bit of hopefulness that it will work. This is generally the case with a new, unknown drug. It’s not much different than the placebo effect, if you think about it.

There are a number of different drugs for my disease that have (roughly) the same statistics as all of their counterparts. People just flip-flop to dodge side-effects.

There are cases where a drug may reduce relapses (a sign of progression) better than its counterparts, but it’s a risk/benefit decision. The drugs that have a better reduction rate have higher risk associated with taking them.

What would you do?

My neurologist would tell you that I’m stable (according to MRIs) but we’ve discussed changing medications, anyway. I’m not inclined to risk it.

Why would you change? Because you’re hoping for something better. You can’t know if you don’t try, right?

We keep buying the mediocre stuff, so there’s no pressure to create something great! I’m sure they would if they could, but when I tell my kids to eat “three green beans,” they eat three beans. Why eat more if there’s no incentive?

8) If the answer isn’t profitable, nobody’s looking for it

Why are you so fat? How many things can you think of that are “risk factors” for heart disease or Alzheimer’s? The fact of the matter is that there are lots.

Different causes means different solutions. Can all of those problems be solved with a single drug? I doubt it. Yet that’s where the research takes us.

There are many different aggravating elements involved in most diseases. It could be genetic, it could be food, or it could be environmental. Maybe it’s a combination.

Maybe it’s having the wrong balance of a, b, and c. Maybe I am heavy on the a-side and you are heavy on the b and c-side. We both have the same illness.
Would you expect a single drug to fix both problems? How do you design an experiment around that?

Many of our modern-day conveniences are variables – stressors that we’ve introduced into our systems and some of us aren’t as resilient to them as others. We’re peeing in our own gas tanks.

There is no doubt that we are more diseased than we were several-hundred years ago. Why is that? Most everything in our environment is different. A broad-brush, or “holistic” approach makes sense for many things, but that’s a big hurdle to clear.

There’s no money in it, either.

There’s no chemical that will make you eat better, stress less, and exercise. You’d have to change your comfortable lifestyle for that. Big pharma won’t touch that with a 10-foot pole.

Maybe I’ll just going to start smoking dope so I don’t have to worry about it anymore.

Jim Turk, of beatmydisease.com, has been featured in several publications and on TV. He has a passion for helping people make the best life for themselves despite their circumstances.