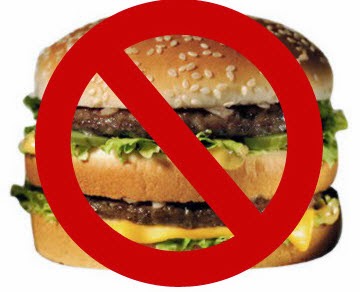 If one of your New Year’s resolutions was to lose weight, a good way to start is by cutting back on fast food.

Those burgers and pizzas may be quick, convenient and cheap, but they’re also loaded with things that can defeat your diet plans.

Check out these reasons to make 2014 the year you decrease your consumption of fast food!

Fat
We all need some fat in our diets, but most of us are taking in way too much. According to the Institute of Medicine, we should be getting 20% to 35% of our daily calorie intake from fats. If you’re following a 1,200-calorie meal plan, this would mean you can have 27 to 47 grams of fat per day. If you’re eating most of your meals at fast food joints, this won’t be easy to stick to. If you start the day with a Deluxe Breakfast Biscuit from McDonald’s, you’ll be consuming 1,320 calories and 63 grams of fat, which means you’ve already blown through an entire day’s worth of calories and fat. Let’s say you have lunch at Burger King and order a Double Whopper with Cheese plus a large Chocolate Shake. The burger has 990 calories and 64 grams of fat, while the shake adds 950 calories and 25 grams of fat. For dinner, how about a Pepperoni Personal Pan Pizza from Pizza Hut? That will pile on another 640 calories and 29 grams of fat from just a little 6” pizza. Your daily calorie total would be 3,900, more than three times the 1,200 you’re trying to stick to, plus 181 grams of fat.

Sure, fast food restaurants do offer less fatty choices, but the items mentioned are pretty average fare for most of them. If you eat at least one meal each day in a fast food place, is it any wonder that you’re not losing any weight?

Saturated fat
As if plain old fat isn’t bad enough, fast food fare tends to be high in artery-clogging saturated fat. For example, the Baconator from Wendy’s stacks two beef patties, two slices of cheese and a pile of bacon into a sandwich that has 830 calories and 51 grams of fat. Besides giving you about 78% of your daily allotment of fat, you also get 112% of your RDA of saturated fat. That means this one burger has more than an entire day’s recommended dose of saturated fat. Add French fries and a shake for a heart attack on a plate.

Cholesterol
Cholesterol is a steroid lipid, or fat, found only in animal food products. Excessive consumption of high cholesterol foods can increase the risk of heart attack or stroke, so a daily intake of less than 300 mg is recommended. Among the food items highest in cholesterol are egg yolks, butter and cheese, all of which can be found in abundance in your average fast food breakfast sandwich. A ham, egg and cheese biscuit can deliver 246 mg of cholesterol, or 82% of your daily limit. An egg and sausage biscuit tops that number with 261 mg or 87% of your daily value. If you need to watch your cholesterol, stay away from those fast food breakfast sandwiches.

Salt
Most of us should be ingesting 1,500 mg to 2,300 mg of sodium per day, but we’re actually getting more like 3,400 mg, which can be deadly for people suffering from high blood pressure, kidney disease or diabetes. Many fast food items are loaded with salt, probably because we’ve been conditioned to think that salty foods taste better. One of the saltiest fast food entrees is the Chicken Po’ Boy from Popeye’s which has 635 calories and a whopping 2,120 mg of sodium—an entire day’s allotment. Even worse is the Chipotle Carnitas Burrito with 1,185 calories and 2,650 mg of sodium or the Hardee’s 2/3 Pound Monster Thickburger with 1,300 calories and 2,860 mg of sodium. If you’re watching your sodium intake, be careful what you order.

Calories
We’ve already seen that fast food sandwiches and entrees are loaded with fat, saturated fat and cholesterol, but they’re also high in calories. As if just having one item isn’t enough to wreck your diet for the day, fast food menus are full of sneaky little “calorie bombs” that can add hundreds of cals to your daily total. If you’re eating at Dunkin’ Donuts, you could have a zero-calorie diet soda—or pile on an extra 730 calories by adding the frozen mocha coffee Coolatta with cream. Double the caloric total of your meal at Nathan’s by ordering the super size French fries for an extra 1,188 calories. Add a sack of White Castle Onion Chips to your order for an additional 980 calories. See how quickly they pile up?

Artificial ingredients
A Wendy’s Frosty may look like a simple mix of milk and ice cream, but a look at the ingredients reveals an unappetizing list of GMO corn syrup, thickening agents,  artificial flavors and worst of all, a laxative chemical used in electronic cigarette fillers called propylene glycol. McDonald’s Chicken McNuggets have a similarly sinister list of ingredients that includes sodium phosphate, autolyzed yeast extract and dimethylpolysiloxane—a chemical used in silicone breast implants. While these chemicals may have passed muster with the FDA, do you really want them in the food you—or your kids—eat?

Caffeine
Order a soda, latte or ice tea with your fast food meal and you may be adding hundreds of mg of caffeine to your daily intake. A 16 oz. serving of McDonald’s coffee contains 100 mg of caffeine, while the same amount of Starbucks Pike Place brewed coffee packs 330 mg.

Carbs
Cutting the amount of carbohydrates you ingest can help you lose weight and lower your chances of developing diabetes. Unfortunately, carbs are everywhere, in sweets, starchy vegetables and grains. The Institute of Medicine recommends that adults get 45 to 65 percent of their daily calorie intake from carbs, so don’t try to cut them out completely. However, fast food tends to be full of simple carbs like those in burger buns, biscuits and donuts. Try to get your daily dose of carbs from healthier sources, like rice, fruits and veggies.

Grease
Think fat is gross? Grease is worse, and can block your arteries, making it more likely you’ll suffer a heart attack. Americans consume an average of 85 pounds of fat and grease each year, and fast food is a major source. If the bag you pick up at the takeout window already has grease on the bottom, maybe you shouldn’t be eating what’s inside.

Hormones
Young girls are reaching puberty earlier than ever these days, and one reason is exposure to hormones in our food. There are six hormones that can accelerate puberty allowed in our food by the FDA, including sex hormones estradiol, estriol, testosterone and progesterone. Another culprit is estrogen, which can contribute to obesity in children. One way to cut your children’s exposure to these hormones is to eat less red meat, and lowering your intake of fast food will help.

There’s nothing wrong with enjoying fast food occasionally, but with so many healthier (and more delicious) alternatives to try, this is a great time to kick the fast food habit!